Eloquent with Rage, ONE Condoms & Will.I.Am.A.Moron

Twitter
Facebook
Pinterest
Tumblr
Email
Advertisement
My good buddy Bob Geise noticed a prompt from ONE Condoms over on Facebook to write a poem about condoms.  Being the good poet and writer that he is, Bob channeled his frustration over a recent interview that Will.I.Am of the Black Eyed Peas conducted with Elle Magazine. Here’s the interesting part:

Elle: If you walked into a woman’s house, what one item would convince you that you weren’t compatible?

W: If she had condoms in her house, that would just f[---]in’ throw me off. That’s just tacky.

Elle: Well, okay, I could see if she had a candy bowl full of them on the coffee table. But if she’s got a few in a drawer, wouldn’t that simply suggest she’s health-conscious?

W: I just think, like, if you’re into someone and you guys get to that level, then that’s something you should converse about together and say, “Hey, maybe we should get some.”

I thought that his awful music would be Will.I.Am’s worst contribution to society. But just when you think you have all the answers, someone changes the questions.  And the question that prompted this whole thing was a softball of epic proportions.  He should have said a sawed-off shotgun.  Or a body in the closet.  But he said what he felt, and now I’ll never feel guilty again for bashing his band for being awful musicians.

Back to Bob.  Here’s the poem that won him a ONE Condoms prize! (Be sure to like both ONE Condoms and Bob’s page, Eloquent with Rage, on Facebook) 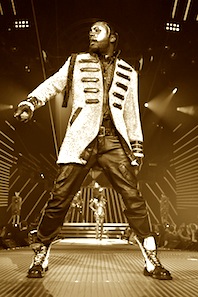 ONE by Bob Geise
i’d like to say to will.i.am
what planet are you from again?
if you ain’t got ONE*, hit the road
god knows what bugs are in your load
the condom I keep in my purse
could save my life--it’s not perverse
you want to feel my velvet love?
you best put that thing in a glove!

Bob also wrote the following Note on Facebook about why he entered the contest, and why he supports ONE Condoms.  I was moved by his kind words, wanted to share them here.

Bob wrote: Yesterday, the ONE Condoms page here on Facebook had a small poetry contest, the winner receiving a ONE party pack. I wrote a trifle of a poem (short and sweet) and submitted it; there were about fifteen other poets who offered some rhymes (and even a haiku!). Turns out that I won! Said Storm Tussey, ONE’s Digital Brand Manager: “Terrific job, the entire office thought yours was the best.” Yay!

I admire ONE Condom for a very specific reason. When my friend Shawn Decker was looking for a condom sponsor for his band Synthetic Division’s tour last year, ONE helped him out with free condoms and swag, including some very cool metal condom holders, which they actually branded for the band! None of the other major condom companies would even talk to Shawn. Why? Shawn has AIDS, and he and Gwenn, his “wife partner,” tour the country educating young people about safer sex in relationships and the issues that arise in serodiscordant couples (in which one partner is positive and one is negative, as Gwenn is). Also, themes related to HIV and AIDS pervade much of Synthetic Division’s music. The bottom line is that condom companies do not want their product associated in any way with disease, let alone HIV. I assume there is some perceived liability issue. All the same, while those corporations may quietly disclaim in small print that the proper use of their condoms can be effective in stopping the spread of disease including HIV, they surely haven’t minded the bazillion dollars they’ve made since HIV and AIDS arrived exactly thirty years ago. ONE Condoms has not distanced itself from the fact that people use condoms to prevent disease as well as pregnancy.

One of the most frustrating aspects of educating for me, for well over a decade, was the cold response Gwenn and I received from condom companies in regard to supporting our message of safe sex.  These same companies sponsor Snooki’s birthday party, and would willing throw mounds of cash at Will.I.Am if given the slightest opportunity.  Speaking of Will.I.Am.Stoopid, it’s strange that someone who writes party down songs like he does would be so conservative when it comes to a female having a proactive stance regarding safer sex.

You’d expect more from a guy who looks like a human condom when he performs on stage.