Rocking for Equality in DC

Twitter
Facebook
Pinterest
Tumblr
Email
Advertisement
Went for a third consecutive weekend in DC, this time playing some music with my bandmate, Marshall Camden.  Here’s a picture of us looking all rockstar-like on the Ellipse in front of the White House, where the rally took place. 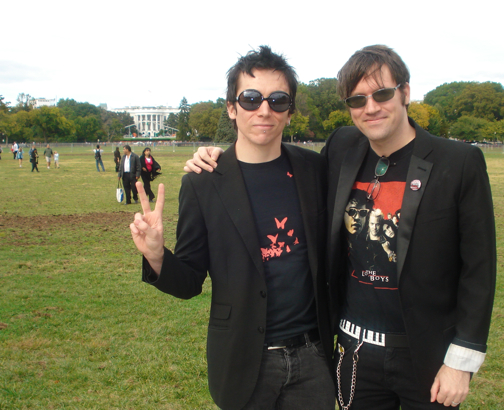 The Ellipse itself is a huge, round patch of grass.  It looks like a UFO landing spot.  The reason for being there was for the Equality March weekend, a little AIDS rally to inspire interest in the cause for the next generation of the LGBT community.

I’ll be posting video of me and Marshall rocking out soon, and some other asides.  For now, I just want to say that Equality- full-equality, not half-assed bullshit- for the LGBT community should be a no brainer whether you are gay or straight.  Anyone who has had a hint of discrimination in their own lives gets this, or at least I hope they would.

In remembrance of Matthew Shepard on the 11th year since his passing, we should all do our parts to continue the fight for equality- as members of the community, allies and- most importantly, human beings.