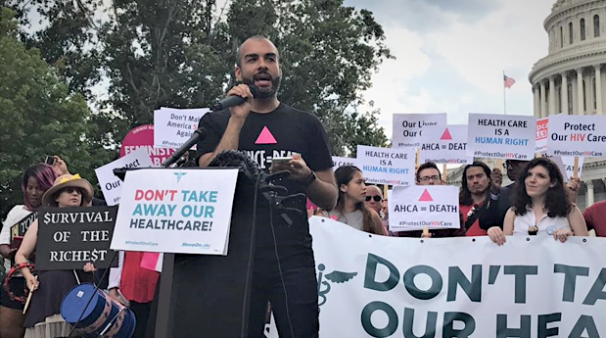 Join the fight to save health care. Courtesy of AIDS United

The Fight for Our Health Care Is Only Getting Started

Senators must hear from us during the July 4 break. Here’s what you can do.

Six months ago, the future of health care in America looked grim. With Republican majorities in both houses of Congress and a president-elect who campaigned on the promise of repealing the health care policies of the Obama administration, the quick demolition of the Affordable Care Act seemed all but assured. The die was cast, and the primary question to be answered was not whether the GOP would repeal the ACA, but what their replacement plan would look like.

However, after 7 years of relentless railing and scheming against the Affordable Care and Patient Protection Act (ACA, or Obamacare), Congressional Republicans had neglected to develop a comprehensive health care plan of their own with which to replace it. Soon, what was supposed to be a foregone conclusion and an easy feather in the cap of President Trump and Congressional Republican leadership turned into a legislative quagmire with the moderate and ultra-conservative wings of the GOP unable to agree upon much of anything besides the fact that they wanted to be able to tell their constituents that they repealed and replaced Obamacare.

As it became clear that the Republican Party was floundering in their attempts to create replacement health care legislation, formal opposition to their efforts began to flourish. Resistance to the dismantling of the ACA, which was at one point spurred on by the possibility of merely mitigating the damage done by the GOP’s impending health care plan, became a genuine belief that it could be stopped.

In the months that have passed, advocates for maintaining and improving upon the gains of the ACA including those within the HIV community were first pleased by scuttling the first House vote on the GOP’s repeal and replace bill, the American Health Care Act (AHCA), but then disappointed watching it pass a few weeks later. Now, a mirror version of the events in the House is taking place in the Senate. After weeks of secret, closed door meetings among Senate Republican leadership, Senate Majority Leader Mitch McConnell (R-KY) finally emerged with a revised version of the AHCA that he said was assured passage through the Senate. However, due to the tenacious advocacy of a broad coalition of Americans who stand united in opposition to the repeal of the ACA, a vote on the Senate health care plan—dubbed the Better Care Reconciliation Act (BCRA)—was postponed earlier this week until after Congress goes on its July 4th recess.

Little has changed in the political landscape surrounding health care reform since the events that took place in the House this spring. The BCRA is largely a carbon copy of the House bill it was based on. The bill has not moved to the center to appease moderate Republicans as was expected by legislative observers. Instead, Majority Leader McConnell has offered small funding increases or minor changes to the bill to individual moderate Senators on occasion. This was the case when he included an additional $45 billion in funding to the BCRA to address the opioid epidemic on Thursday in a blatant attempt to sway Senators Rob Portman (R-OH) and Shelley Moore Capito (R-WV) without addressing the bill’s radical and draconian changes to Medicaid. These Medicaid changes are actually more damaging than those in the House bill.

As was the case with the AHCA, the American people are strongly opposed to the Senate health care plan, with public opinion around the legislation actually declining since polling was done on the House bill. In one poll conducted by USA Today and Suffolk University, only 12% of Americans said they supported the BCRA, numbers that pale in comparison to the 51% of the general public that approves of the ACA.

However, as was proved earlier by the vote in the House and by Majority Leader McConnell’s insistence on holding a vote on the BCRA, Republicans are determined to find a way to support some kind of bill that will allow them to say that they have repealed Obamacare. It is now up to advocates—ordinary Americans capable of banding together to overcome extraordinary odds to save the ACA from repeal.

The HIV advocacy community has always, and will always take care of each other and protect the most vulnerable among us. The fight we are engaged in right now around the BCRA requires us to join hands with a whole host of other communities, just as we did in 2009 and 2010 when we were trying to pass the ACA in the first place. Whether it is our brothers and sisters advocating for disability rights and affordable care for seniors or groups working on behalf of pregnant women and new mothers, we must stand up and fight back together.

AIDS United’s Public Policy Committee (PPC) has spent the last week in Washington working to stop the repeal of the ACA. The PPC released a position statement in opposition to the BCRA stating that the bill cannot be fixed then hand delivered the statement to each Senate office. The committee additionally participated in the People’s Filibuster and then held over 40 meetings with Key Senate and House members about both the AHCA and appropriations. AIDS United will continue to oppose the bill in the coming weeks and urges HIV advocates to act.

The fate of the Senate health care bill may be decided over the next few days as Senators head back to their home states for the July 4th recess. Senators will be paying attention to the level of opposition they face which may determine how they vote on the BCRA. We must make sure that the pressure we place on every Senator who is considering voting yes on this atrocious health care bill is unrelenting and unavoidable. AIDS United urges every person living with or affected by HIV and our allies to seek out Senators’ public appearances, attend rallies to save health care in your state, to try to meet with Senators or staff at state campaign offices and to flood Senators phones with calls in opposition to the BCRA. Advocates can call or tweet at Senators easily using the Trumpcare Toolkit or send your state’s Senators a letter using AIDS United’s action alert.