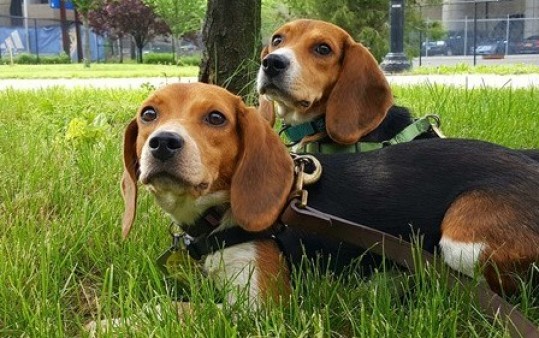 At the beginning of the year, I shared with everyone the story of losing my two dogs, Hope and Parker. As a quick reminder, they were two adored beagles whom I was fortunate to have since birth. After 13 and 15 years of creating memories together, they both transitioned within a week. Hope, the older of the two, from heart failure and Parker, from pneumonia by way of her weakened immune system due to cancer.

After submitting my blog post, I was optimistic that I would pull through the loss despite the grief I was experiencing. Since their passing, I wish I can say it was all roses, but there were many lessons on how to push through sadness. If they gave awards for moving on, I would win the rubber chicken as it was the most difficult time of my life. As shared before, because I am on the outs with my family, Hope and Parker were my family and now my life felt empty.

My mind was stuck in a loop of “I should have,” as I re-examined their last months and looked for ways I could have foreseen their upcoming passing. Maybe it was the food I gave them and it wasn’t healthy. Maybe I should have walked them more; maybe I should have walked them less. Maybe if I looked in their eyes, they could tell me of the pain they were experiencing. Maybe, in the end, it was my fault, never mind the fact they were senior dogs and what was happening was natural. As a dog owner, you always feel your pet will continue way past the time most breeds do. Because of the unique love you provide, they will carry on.

One aspect of my life that suffered was my health. I was always on top of my HIV medications and had a purpose in taking them regularly and always on time. After my loss, I didn’t see what the point was. Actually, I did see but I simply didn’t care. There were days I couldn’t motivate myself to take a pill or if I remembered, I told myself there was always the next day. I would take them then.

I was walking around with anger as my interactions with others included a wall in which I didn’t want anyone to penetrate. In New York, you’re surrounded by people and while navigating the streets, attempt to not bump into anyone. At least not on purpose. The way I was now feeling, if I bumped into you, oh well. Usually, when there was contact, I looked back to say I was sorry. Now when I made contact I let my anger control myself as I disregarded what I just did. And if the person wanted to physically fight; maybe it was what I needed to get the anger out. Luckily it never came to that. But I think the reason I didn’t look back to apologize is that I knew in this big city I would never see that person again. So I didn’t have to worry about how they felt about me.

I would never see them again……

I comfort myself with a daily alcoholic drink. Despite the concern my doctor had about my elevated liver levels. At the time he didn’t know if it was because of my HIV meds or the liquor. Again it made no difference to me as I needed something to help me sleep. Unfortunately, it also made me think of the girls and the tears which fell allowed me to close my eyes.

My eyes finally opened up to the reality that they were gone and I had to move on. I didn’t have to forget but embrace the memories I did have with them. My turning point was reflecting on the good times and to not dwell on the last months. And take those memories and cherish them.

I also had to wake my eyes up to my health situation as I was doing a disservice to myself by not properly managing my care. For the past 30 years of my HIV status I’ve overcome mountains, and to throw it all away now was not wise. And it wouldn’t bring Hope and Parker back.

But whether it’s your health, overcoming grief or anything which you feel has encumbered you, you can’t give up. It’s those dark times when you find the support of others and draw on that love to keep going.

I stopped being stubborn and reached out.

In my I was gifted with two rescue beagles, thought to be around 11 months, who were found abandoned in a Tennessee ditch. They were sisters and the rescue agency, S.O.S Beagles, wanted to keep them together. My initial response was no, as I didn’t know if I wanted to go through the part when you lose a pet. But again I focused on the fact that I would be giving a good life to two beautiful creatures. And I’m sure Hope and Parker, well maybe not Parker, would approve of my chance to rescue two lives. 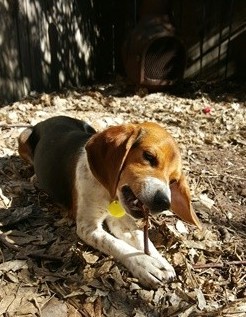 And it has been a blessing as I see them for the individual they are. I know they will never be Hope and Parker, as it would be unfair to them, yet they do provide the same joy of companionship. I’ve also fulfilled my promise to not go to a breeder for purebreds but to adopt a rescue.

I will admit, going from senior dogs to puppies has some reminders of age and tolerance as you once again get used to the frantic energy of puppies, the wake-ups at 5 am and the constant rush to take something out their mouths they should not be chewing, but I wouldn’t trade it for anything. 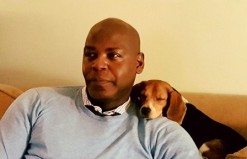 I found hope again. And in the search I discovered that during any obstacle in my life, I need to give myself permission to grieve but don’t give up. And that around the corner is a new chapter waiting. I rescued two dogs, but when I look at them jump for joy when I walk in the door or when I see them sleeping soundly, curled behind my legs; I have to wonder, who rescued who.