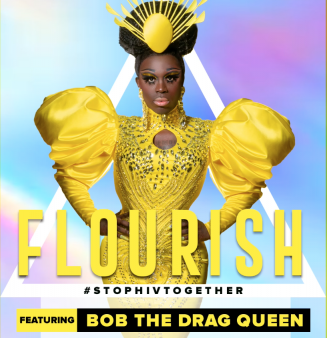 FLOURISH with Bob the Drag Queen

How to FLOURISH With HIV

On August 6, a magical and memorable event brought members of the LGBTQIA+ community together to talk about HIV.

The virtual experience FLOURISH was produced by the creative agency For All Humans in conjunction with the Centers for Disease Control and Prevention’s “Let’s Stop HIV Together” campaign, which aims to end HIV stigma and promote HIV prevention, testing and treatment. Hosted by Bob the Drag Queen (who shared a personal story about getting an HIV test), the one-hour show was packed with essential HIV information presented by a bevy of drag queens and kings and community members appearing live from Miami, New Orleans, Baton Rouge, Orlando and Atlanta.

IV Fischer promoted safer sex via a campy rendition of Rihanna’s “Sex With Me”; while notable performers Apostrophe, Titus and Majic Dyke also showcased their talents.

FLOURISH also featured an HIV-related trivia section with Lucy Stoole and Joe Pombrowski that included questions on everything from how often you should get tested for HIV to what happens if you miss a dose of your HIV treatment.

POZ was thrilled to participate in the event. Other community partners included AIDS Atlanta, Metro Health in Baton Rouge, Prevention Access, Prevention 305 and QLatinx. Check out our video:

If you missed the live event, which streamed on the platform Twitch, you can still learn how to flourish in the face of HIV by watching the entire program below.

FLOURISH with Bob the Drag Queen! from For All Humans on Vimeo.