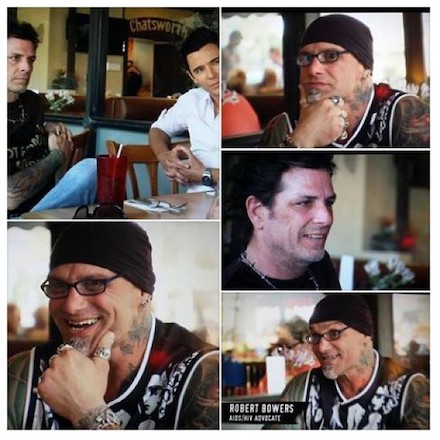 Last month I posted a critical observation of VH1’s reality TV show, Couples Therapy. The post was in regard to how castmember Evel Dick’s HIV disclosure (in episode 5, “The Truth is Out There”) was handled. Two weeks ago, however, the show really stepped up when they brought in long-time HIV advocate and AIDS asskicker Bob Bowers to give Dick some words of encouragement. (You can watch full episodes here- but the one referenced in this blog, “Meatball Problems”, won’t be available until Dec 4.)

Bob has been living with HIV for three decades and has a no-nonsense approach to HIV education. He wears his heart on his sleeve, which is an impressive sleeve of ink I must say. I really admire his work, and I applaud Couples Therapy for giving Dick the opportunity to connect with Bob, who casually told his own story, offered his ear to Dick’s concerns and also informed Dick about the facts about HIV transmission for those who take their HIV medications regularly and acquire an undetectable viral load.

I’m sure it was a revelation for Dick- and the issue of transmission, spoken in such detail in a relaxed manner, isn’t something you see on TV very often.

Kudos to Bob, Dick, Dr. Jenn and VH1 for giving people the opportunity to learn more about HIV and how it affects people and their relationships.