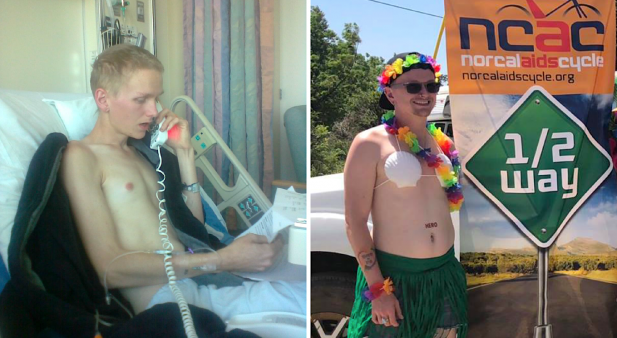 Nicholaus Johnson in the hospital with AIDS in 2010, and volunteering at the NorCal AIDS Cycle in 2018

Gay Pride: As Relevant, Fun and Important as Ever!

Just ask Nicholaus Johnson, a former “junkie” with AIDS who is now a sober college student helping the HIV community.

Sunshine usually comes out in June. And so do people. Sometimes they make big announcements, declaring sexual preferences, or they suit-up and show-up to support Gay Pride. Why?

Because today—more than ever—we all need a safe space and time where we can be ourselves. Over the years, Gay Pride has evolved into a celebrated event, a party where we play, have fun, and continue to carry the message that equality matters.

Sacramento’s 27-year-old Nicholaus Johnson was raised by a military dad. Though Nicholaus said he knew all of his life that he was gay, he denied it out of fear of being rejected. “I could not be out,” Nicholaus said. “And when I did finally come out at 22, my dad was shocked.”

Still, Nicholaus, like so many others, could not continue living a lie. We live in a society that professes equality for all. We need to continue enforcing that motto.

“I am definitely going to Pride this year,” Nicholaus said. “I think it’s important that we stick together now more than ever because of the climate of this country.” 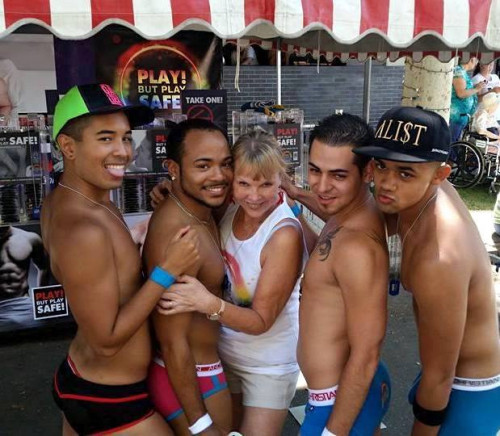 Nicholaus celebrates being gay these days. And yet, he’s now facing another challenge. Nicholaus is also living with AIDS. Ironically, it was during June 2010—Pride month—when Nicholaus became extremely ill and was hospitalized. He was diagnosed with having AIDS. Today, his virus is undetectable, but it has been a long struggle getting his CD4 count up.

Now five years clean and sober, Nicholaus is committed to showing people that there’s a better way to live than being strung out on drugs. This June, with Pride—and three associate’s degrees, Nicholaus is graduating from community college.

“Whoever would of thought it could happen to a ‘junkie’ like me.” Next year, Nicholaus is transferring to a four-year college. Currently, he works full time doing case management and substance abuse counseling.

Nicholaus is giving back, volunteering with the HIV/AIDS community. On a windy day, Nicholaus was working the Northern California AIDS Challenge, a long distance fundraising bike ride. “I am crew chief navigator,” said Nicholaus. “They got a problem on the road, I take care of it.”

Gay Pride emerged after the 1969 Stonewall Riots in New York City when gay people fought back against police brutality. Is it better today, yes, in many states. But we still have a long way to go in order for us to all to be accepted unconditionally—everywhere.