Until We Get Free: Fighting for Liberation on Black HIV/AIDS Awareness Day

February 7, 2018: Today marks the second National Black HIV/AIDS Awareness Day we have observed under the most openly racist administration in decades. The legacy of slavery, violence against and systemic oppression of Black people hangs heavy over the U.S., and has always permeated our sociopolitical climate. But the brazen racism and xenophobia trumpeted from the highest levels of government has raised real alarm for people of African descent, no matter how adept we have become at navigating systemic and interpersonal expressions of racism.

Over the past year, we have had to fight the efforts of the administration and Congress to suppress Black activism, defend and give cover to violent white supremacists, disparage African countries, and relentlessly attack the health care safety net upon which Black people living with and vulnerable to HIV rely. Black people don’t need anyone to tell us that the fight for equity and onwards to liberation is far from over.

The CDC estimates that African Americans represent more than 40 percent of all people living with HIV and nearly half of all persons with newly diagnosed HIV[1] in the U.S., despite comprising only 13% of the overall population. Black people living with HIV are also more likely to be diagnosed with AIDS and more likely to die of complications of AIDS than their white counterparts. These health inequities are a direct product of racist policies and racism in resource distribution.

If a society shows who and what it values through its investments, those who allocate resources have made clear yet again that they view Black people as disposable. Many in positions of great power would rather send our children to prison than to college; they would also rather let us die than invest in HIV care and prevention. This is a moment in history where we cannot afford to be silent or complacent. 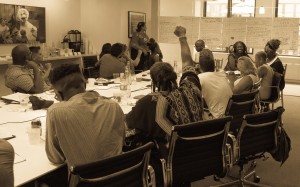 Last year, a collective of leaders of color in the HIV justice movement, organized by CounterNarrative Project and Positive Women’s Network – USA (PWN-USA), convened in New York to envision a racially just response to the HIV epidemic. From that meeting came A Declaration of Liberation: Building a Racially Just and Strategic Domestic HIV Movement, a document that asserted that there can be no progress in the HIV movement absent an explicit commitment to racial justice. Ending the epidemic and improving the lives of people living with HIV necessarily requires a deep interrogation of the racist underpinnings on which the health care and other systems have historically functioned and within whose constraints advocates have largely operated. This framework is an exciting tool for organizations to envision and strive for racial justice, while hopefully paving the way for new ways of sharing resources and ideas and advancing advocacy goals that center the experiences of people of color, particularly people of color disproportionately impacted by the epidemic.

Moving into the second year of the presidency of the racist in chief, PWN-USA is embarking on our own journey in rooting our work boldly and firmly within a racial justice framework at all levels of the organization and throughout our broader constituency. We are also excited to embark on more intentional leadership development work in organizing the Black United Leadership Institute pre-conference of the HIV is Not a Crime III Training Academy to support leadership by Black people in the HIV criminalization reform movement.

How else can this look? What does it mean to elevate racial justice in HIV advocacy? 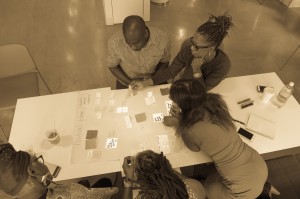 On this National Black HIV/AIDS Awareness Day and beyond, we must think about other ways to elevate racial justice in HIV advocacy. At a time when the president spews divide and conquer rhetoric from the bully pulpit, fabricating a false sense of scarcity for all but the richest, designed to pit Black and brown communities against each other, our root cause analysis and advocacy around the drivers of the epidemic must be robust and transformative.  What does this look like? Resourcing multidisciplinary advocacy responses to confront the intersectional issues of people living with HIV.  As the oft-quoted Audre Lourde so aptly put it, “There is no thing as a single-issue struggle because we do not live single-issue lives.” Now is the time to break down silos and engage in deeply intersectional movement work that reflects the diversity of experiences of Black people living with HIV.

Responses by HIV advocacy groups to the current administration’s persistent and hateful attacks on immigrant communities have been notably underwhelming, even absent, while divisive rhetoric dictates even more nefarious public policy. The Trump administration’s deceitful, repeated efforts to make “immigrant” synonymous with “violent gangster” are not just empty bluster:  Trump’s hardline proposals to turn away asylum and refuge seekers and strike “immigration deals” to end the Diversity Visa Program as a condition for protecting Dreamers would have a real and calamitous impact on millions of Black immigrants. The administration’s enforcement of immigration law through ICE and ending of temporary protected status (TPS) for majority Black countries are already devastating Black immigrant communities. Black immigrants, like U.S.-born Black people, face many obstacles and negative outcomes in navigating the country’s sociopolitical structures, but also experience more racial discrimination within the nation’s immigration enforcement system, where they are more likely to be detained and deported for criminal convictions than other immigrant populations. HIV justice advocates must fight for immigrant rights. 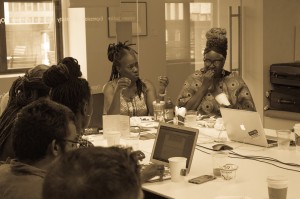 In 2018, more than 30 states and U.S. territories still maintain antiquated and stigma-driven laws that apply only to people living with HIV, including HIV-specific criminal laws that punish alleged exposure, non-disclosure, and transmission of HIV, and laws that increase penalties for people living with HIV who are convicted of sex work or related offenses. These laws have been shown as consistent with other aspects of the criminal legal system to have a disproportionate impact on and discriminatory outcomes for Black people. The U.S. remains a world leader in incarceration with Black people bearing a disparate brunt of decades of over policing, surveillance, and systemic violence. Under Attorney General Jeff Sessions, the Department of Justice has sought to revive the war on drugs and further exacerbate the generational and collateral consequences of mass incarceration on our communities.  HIV justice advocates must fight to decarcerate Black bodies.

The current administration and Congress is obsessed with curtailing the reproductive rights and politicizing women’s health. Despite being unable to reach a long-term agreement keep the government funded, Congressional Republicans had the gall to bring a bill to the floor that would obstruct access to safe and legal abortion after 20 weeks in the midst of a protracted budget battle and immigration policy negotiations. Assaults like these are thinly veiled as touting “religious freedom”, but disproportionately impact low-income women and harken back to the government’s historical occupation with using public policy to control Black women’s bodies and reproduction. HIV justice advocates must fight for access to comprehensive sexual and reproductive health care.

In the 2015 U.S. transgender survey, Black respondents reported living with HIV at a rate more than twenty times higher than the rate in the U.S. population and five times higher than the rate of other Black people in the U.S. Over a third of Black respondents who saw a health care provider in the past year reported having a negative experience related to their gender expression that created a barrier to accessing care, from harassment to refusal of services and even physical assault. Transphobic discrimination, economic insecurity, and criminalization erect compounding barriers for people of trans experience seeking health care. Yet the Trump administration had the audacity to invert the very mission and purpose of the Department of Health and Human Services Office of Civil Rights from promoting health equity and defending access to health care to sanctioning discrimination in the name of “morals” or “religion.” This will further encumber timely access to comprehensive care and lifesaving treatment for people of trans experience and allied communities. HIV justice advocates must fight like hell for the health, safety, and dignity of people of trans experience.

Last year, the Trump Administration and Republicans in Congress wantonly passed their tax scam legislation, providing massive tax cuts for corporations and the wealthiest, ballooning the federal deficit, and laying inroads for funding cuts to essential safety net programs on which Black people living with and vulnerable to HIV depend on to survive. Health care for low-income people has been jeopardized from Day 1 of Trump’s administration, subject to relentless acts of sabotage undermining the Affordable Care Act and plans to fundamentally restructure Medicaid as we know it. In enacting a new policy that encourages states to impose work requirements for Medicaid recipients, the Administration has discarded decades of evidence that such requirements fail to increase employment while having a distinctly negative impact on health and wellbeing. Instead, they have opted to conjure racist stereotypes about low-income people of color in a cynical bid to gain public support for decimating the program upon which 40% of people living with HIV and 1 of 3 Black women of reproductive age rely. Without economic justice, there can be no racial justice. HIV justice advocates must fight to protect the essential safety net.

Staying the course means there is a lot to fight against in this political moment and beyond. Yet we must not lose sight of what we are fighting for. We must avoid the traps of agents that seek to pit communities of color and even other movements against each other, understanding that our liberation is bound together. We must disrupt, dismantle, and re-envision oppressive systems driving HIV injustice, until all Black people in all of our diversity get free.

Switching HIV Meds to Biktarvy Is Safe, Effective Among Seniors