Twitter
Facebook
Pinterest
Tumblr
Email
Advertisement
The crappy news of the week is that Ethan Zohn’s cancer has returned. Many of you may know Ethan from Survivor Africa, the reality show that he won a million dollars on and then used the money to start an HIV/AIDS awareness organization called Grassroot Soccer.

I blogged a bit about Ethan’s cancer diagnosis in 2009- I named him my Person of the Year that year as well. Up until then, I’d used the Person of the Year as a gag of sorts... but when Ethan was diagnosed with cancer, well, his health was all I could think about. The AIDS community has far too few heroes to lose.  Through his initial triumph due to a stem cell transplant that saw him living in a bubble, he opened up his medical ordeal to educate others about the disease.  He’s a hero to lots of people- I’ve met him several times, he’s good people and I consider him a friend.

And this week I’ve been extremely saddened by this news. I know Ethan’s a fighter- he’s a healthy guy aside from his pet cancer- and he’ll do everything he can to knock cancer back on its ass.  The process if grueling, it’s one he’s already been through and now it faces him again.  On Wednesday, he went public with the news, and Jenna posted on Twitter about it. The hashtag #GetBetterEthan was reposted by thousands of people.

As many of us know personally, health challenges can often be private affairs. Even the healthiest among us hate to admit when a cold has exerted its will.  Any reminder of our vulnerability, or even mortality, offers a knee-jerk reaction. Defiance.  At a base level, none of us want to think about our inevitable deaths.  But when we bond over our concern, and share the treatment process, the coping, the victories and the defeats, it makes us stronger as a whole.

I’m really hopeful for Ethan. I’m sending all my positoid vibes his way.  He’s been a true godsend to the AIDS community. In the grand picture, he’s given people with cancer so much inspiration... hell, in the midst of receiving all of this news about his immediate future and the impending treatments, he’s still going to run in the NYC Marathon this weekend to raise money for Grassroot Soccer.

I just donated- I hope you consider doing the same. 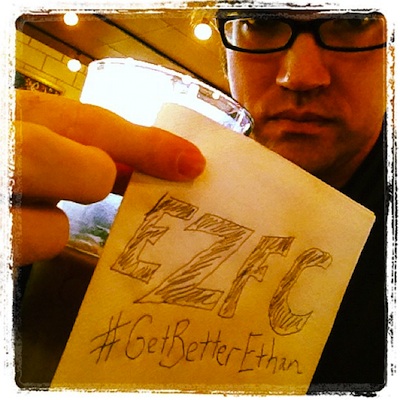