Gilead Duped Me into Being Their Mouthpiece. Here’s How.

How insidious is the reach of Big Pharma? It can affect our policy-making, and even trick people like me into shilling for them.

This is the story of the insidious influence of Big Pharma on our HIV/AIDS leadership and policy-making, and how an experienced activist like me was tricked into delivering messages for the HIV pharma giant Gilead Sciences.

I was bamboozled because I didn’t do my homework, and I acknowledge this. I relied upon institutions I trusted and causes that sounded great on paper. All the while, Gilead’s fingerprints were everywhere.

The only way for me to make this right is to apologize, first, for putting my name on a seemingly helpful editorial, “The struggle to maintain access to life-saving HIV medications,” (The Washington Blade, 2/22/2019), which also appeared on my blog as, “A Medicare Change Could Keep Us from Life-Saving HIV Medications,” a post I must now disavow.

This media outreach project, as it turns out, was bought and paid for by Gilead, and included specific messaging that benefits the marketing of their newer HIV drugs.

This is how it happened and who was involved. The chips can fall where they may. 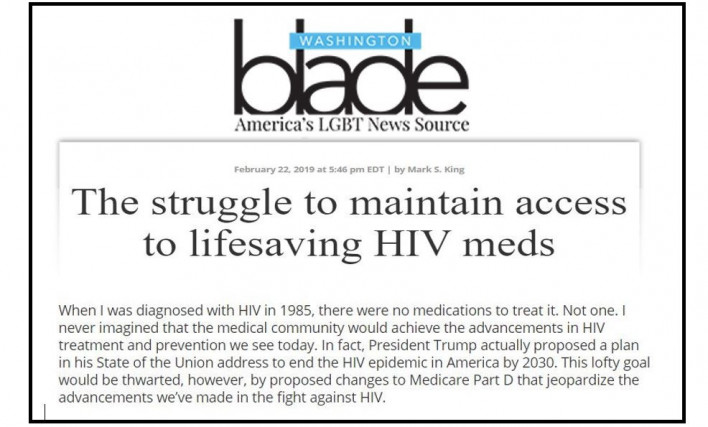 In January 2019, I responded to outreach from AIDS United, a national HIV/AIDS policy, lobbying and funding organization, to participate in a media strategy they asserted would help people living with HIV (PLWH). AIDS United wanted to identify PLWH who have benefited from Medicare Part D; specifically, how that program makes life-sustaining HIV medications available to those of us who are on Medicare.

At the time, AIDS United was fighting a proposed federal policy change that would have placed restrictions on what medications those of us on Medicare Part D could access first, before being eligible for newer medications. The policy change was presented as an attempt to save taxpayer dollars, but AIDS United argued it could potentially limit the options of those who may need the newest medications.

AIDS United sought influential PLWH to write editorials to drive public opinion against the policy change. I agreed to participate but did not receive payment of any kind. I participated because a) fighting this policy change sounded legit, b) I love seeing my name in the newspaper, and c) AIDS United is a trusted national consortium of HIV/AIDS community and organizational leaders.

Activism lesson: if it isn’t your lane, don’t pretend that it is. Activist Writer lesson: don’t ever allow your name to be pasted onto someone else’s writing. They might be sneaking in key messages for Big Pharma.

The finished editorial sounded really smart. It cited how people might perish if they were forced to rely upon generics before having access to the latest drugs. It even referenced a study that suggests as much. From the editorial:

“Interfering with access to effective treatment formularies for Medicare Part D enrollees under the guise of pricing reductions will cause more harm than good. In fact, a recent study published in the American Journal of Managed Care estimates that there would be 16,200 more cumulative deaths by 2025 if more restricted treatment options are allowed to take effect.”

I never questioned the study referenced. I trusted the players involved. Ahem.

A few weeks after the piece was published in The Washington Blade and on my site, activist James Krellenstein pointed out to me that the study’s relevance to the Medicare Part D debate is highly questionable. The reason is a pharma marketing lesson that Gilead doesn’t want you to read or understand, but stick with me. Drama is coming.

The study takes a fantasy scenario and manipulates it for Gilead’s benefit. It imagines that, if every PLWH were forced to use Gilead’s older drugs (such as Truvada, Viread, Atripla, Complera, and Stribild), and they had restricted access to Gilead’s newer drugs (like Descovy or Genvoya), then over 16,000 people would perish.

Why, James asked me, would this study suggest that 16,000 people could die in the next few years if they were forced to rely on the older drugs? Doesn’t that death toll sound severe? Would it, perhaps, have anything to do with the fact that Gilead’s older formulations, such as Truvada, are going generic and the newer versions make them a lot more money? Why did this study conjure up this fantasy scenario in the first place?

The reason is simple. Because the study was funded by Gilead, the maker of those older drugs as well as the new, more expensive alternatives. Had I read the study thoroughly, I would have seen that it notes, right there in the text, that Gilead paid for the research. If only there was a screen shot of that. Oh.

James then asked me, if Gilead now believes their older drugs could cause an avalanche of deaths, why did they intentionally delay the development of “new and improved” drugs by nearly a decade? Have they just been kicking back, watching people on older drugs like Truvada experience side effects or die, when they knew they had a better, safer drug waiting in the wings? (Um, pretty much, yeah.)

James didn’t have to keep asking me questions. Now I had a few of my own.

How did Precision Strategies come up with this obscure study to help make a case about Part D expansion? And why did they use a study in the editorial that’s really just an overblown argument for Gilead’s newer HIV medications?

I was used as a tool to deliver a message for Gilead. That message was not simply about the proposed Part D policy change, but also about the supposed horrors of a drug Gilead was phasing out and the benefits of their new one.

Precision Strategies proudly claims on their site that they work with healthcare clients “to help their priorities resonate among key decision-makers and influencers.” Like bloggers living with HIV, I suppose. They just don’t tell you who’s writing the checks or what their motives might be.

This is the uncomfortable part, because it forces me to call out people I otherwise respect.

It took AIDS United four months, after multiple requests and many promises to get right back to me, to respond to my questions. When I finally spoke with AIDS United leadership last week, they were dismayed that I felt exploited, and sorry that Gilead’s ownership of this effort wasn’t revealed to me. I told them that the tactics used by Precision Strategies were dishonest and served the bottom line of their client, Gilead, first and foremost.

AIDS United said the chaos of fighting the policy change, on top of their usual full plate of policy work, contributed to the poor communication. They never meant to mislead me, they said, and they are terribly sorry for this misunderstanding.

This is where I must mention that a Gilead executive, Amy Flood, sits on AIDS United’s Board of Trustees. And Gilead isn’t the only pharmaceutical company with a seat on the Board.

Oh, and a final, totally absurd thing. I had a conversation last week with the account director at Precision Strategies, Hayley Matz Meadvin, and she was shocked, shocked I tell you, that I wasn’t told while working on the editorial that they worked for Gilead. And she seriously tried to convince me that Precision Strategies found the obscure study themselves, without input from Gilead – and, get this, she said they hadn’t even noticed the part where it says Gilead had funded the study. Oh wait, there’s more! Hayley said they didn’t consult with Gilead at all during this project. We are talking about their client. Gilead. Whom they work for. Hayley actually wanted me to believe all this.

Our community’s relationship with Big Pharma has always been fraught with tension and cross purposes. How do we coexist without being exploited, and why do we allow them to buy our silence?

Beats me. Gilead got exactly what they wanted from me. But I am a tiny cog in their machine to sell pills and maximize profitability. There’s so much more at stake here.

Gilead has tried everything to extend their HIV drug patents, even if it means withholding a drug with less serious side effects while they delay access to “improved” drug formulations. In a class action lawsuit being litigated now, Gilead is accused of participating in a price fixing scheme to keep HIV meds as expensive as possible. They are also accused of keeping billions in profits from PrEP patents that legal experts claim rightfully belong to the Centers for Disease Control and Prevention, i.e., the taxpayer.

If our HIV/AIDS leadership is dedicated to expanded access to treatment, why in the hell are they staying silent about the actions Gilead has taken to limit the choices and the affordability of medications for people living with HIV? How is this okay with any organization or community leader?

Why has it fallen on the handful of activists behind #PrEP4All to alert congress about Gilead’s monopolizing and shady patent profits? Why has #PrEP4All’s activism, which has led to a congressional hearing about Gilead’s price gouging, happened with minimal participation from national policy leaders like AIDS United? (Go search ’HIV congressional hearing’ and then marvel at the massive, mainstream attention #PrEP4All managed to bring to the topics of PrEP, Truvada, and Gilead’s greed.)

Do we actually think Big Pharma will gather all their marbles and go home if we dare call them out? Do we think they would sever ties with their own consumer population if we took a stand?

It is amazing, really, how fear can drive the decisions of the very HIV organizations that were founded to empower people.

These are important questions. They deserve answers.

UPDATE: Leadership at AIDS United have answered my written follow-up questions. Their response leaves me more frustrated than before. Evidently, it is easier to thread Truvada through the eye of a needle than to get AIDS United to criticize, much less challenge, Gilead in any way. Here are takeaways from their written response: