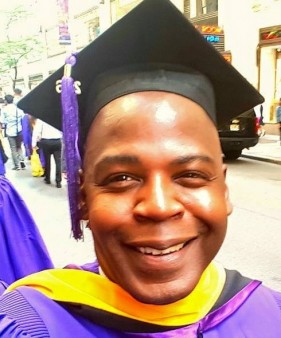 Once again I graduated from college, but I’ve also graduated to a better HIV healthy lifestyle.

It’s been awhile since I created a blog post for Poz.com, yet I had good reason for my absence. Reason being I was in the process of completing my final semester in the New York University Master’s program for Communication and I had to focus in on my studies. I have to say it was a tough two and a half year journey with many opportunities to grow and learn. It was also a difficult final year as I experienced unexpected changes personally and loss of beloved pets. Yet through it all I endured and with perseverance I can stand proudly with degree in hand.

Yet I would be remiss if my graduation was strictly academic. I was also graduating from the forces which were holding me back from living my full potential life, especially as it related to my HIV status. I was moving away from previous feeling that I once had. Negative thoughts I told myself of not being able to succeed or accomplish anything worthwhile as I was living with a disease. Having a feeling of why even bother as I would not be alive to experience this moment based on my HIV diagnoses. A belief that my goals and dreams were not to be achieved, instead deferred.

It was a bittersweet moment for me walking across the stage as they called my name. I obtained my degree with no support from my family as they expressed numerous times that by attending higher education I was ‘acting white’ and ‘thought I was better than them.” I initially took their stuff and placed it on me and allowed it to encapsulate my life. That unworthiness feeling extended to my early days of being positive. I was already shunned by them based on my sexuality and my HIV status affirmed to them my lifestyle was a sin. I initially felt maybe they were right and I was not worthy of anything good. That my HIV positive status was an affirmation of my inability to be loved and I was cursed. That feeling of not being supported by family made it difficult to want to succeed as your purpose becomes muddled and lost.

Yet inside there was a small voice that told me not to give in or give up. It was the same voice I tended to ignore when I jeopardized my health by not taking my medication. It was the same negative sound I experienced which directed me to alcohol and unsafe sex with numerous partners. All in an effort to numb my depression and make it through another day. It was the same small voice I strangled when I attempted to go after my dreams, only to not pursue it as success was an experience I was uncomfortable with.

It’s only when I started to listen to that small voice and block out the negative sounds, did I start to feel I could actually be successful in my goals. By looking in the mirror and embracing self, I started to move to a loving place of self. It was at that moment I applied for graduate school as I knew I was ready to start living the life I thought my HIV and others took from me.

I had to reshape my purpose and not to enter this new area of education to prove a point. I couldn’t let others win by trying to prove a point or place myself on a higher platform just to throw back at them my ability to succeed. Just like my HIV health, I had to do it for me and no other. I had to want to be successful simply to show myself that I could achieve.

So after so much hard work I finally graduated. Not only with a degree but I also graduated from a place where I no longer let my HIV status dictate my life. I graduated with the knowledge that I was worthy and my health didn’t make me a lesser person. I moved from a place where I let self-doubt lead me to bad choices and instead I amplified the small voice which affirmed I could do anything or be anything in life. I moved across the stage from a place where I no longer believed others needed to love me for me to love myself. Recognizing that self-love is the greatest gift one can experience. My degree was earned from the many lessons I encounter along the way and after going through so many tests, my final was taking a hard look at myself and telling myself I could do it.

My family never showed up to see me walk but I was now in the place to recognize that I didn’t move myself to a better place for their benefit. That my transition helped me to form new families of friends who stood and clapped for me when I walked across the stage.

I finally graduated and from my vantage point I have learned I was always meant to fly. And when I shared my news on Facebook, I shared the following announcement.

I was once homeless.
I have HIV
Some of my family has disowned me.
I’m damn near 50.
I had to face death.
My bank balance used to be zero.
I’ve been rejected several times because of my status.
I’ve experienced racism and
today I walk with my Masters.

On to my next goal!