Pop artist and activist Keith Haring would have turned 54 years old today. In his honor, Google has created a doodle.


Keith is one of the many artists the world lost too soon because of AIDS. I have a Haring poster of “Ignorance=Fear” hanging in my POZ office, and it inspires me every day.

He was born to a cartoonist father in Reading, Pennsylvania, and moved to New York City when he was 19. He was captivated by the graffiti scene and soon began decorating the NYC subways with his signature imagery.

Keith became a darling of the ’80s art scene, but it was a dark time in New York. He wrote in his journal: “My friends are dropping like flies. Work is all I have, and art is more important than life.”

After being diagnosed with HIV in 1988, Haring established the Keith Haring Foundation. He used his art to generate activism and raise AIDS awareness. Keith died in 1990 at the age of 31.

I haven’t seen the Keith Haring exhibit at the Brooklyn Museum yet (it runs through July 8), but I did get the chance to see the mural that he created in the second-floor bathroom at the LGBT Community Center in Greenwich Village. The room is no longer a bathroom, but the mural remains. 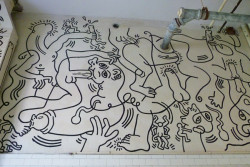 For more on his extraordinary work and life, visit haring.com.

Visit the POZ Pinterest page to see some of Haring’s art.