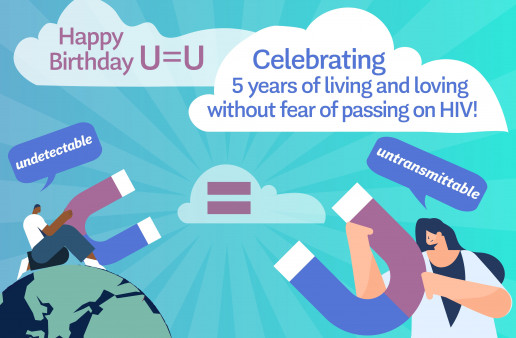 “Undetectable Equals Untransmittable” turns 5. Here’s why the HIV fact remains groundbreaking—and how you can celebrate July 21.

In July of 2016, a group of advocates, activists, and scientists teamed together to proclaim once and for all that people living with HIV with undetectable viral loads (< 200 copies/mL) cannot sexually transmit HIV. Together, they coined the phrase “Undetectable = Untransmittable” or U=U.

Since then, people living with HIV around the world have turned this scientific fact into a global grassroots movement, shouting from the rooftops that people with HIV can live and love without the fear of passing on the virus. Confirmed and validated by global organizations like the World Health Organization, the Centers for Disease Control and Prevention, UNAIDS and others, U=U has transformed the HIV landscape and given advocates a new way to fight for treatment for all. The Lancet has called for a renewed effort to ensure healthcare providers tell their patients about U=U, which has been showed to improve health outcomes, including treatment adherence and mental health. People with HIV around the world have reclaimed the narrative about their bodies and proven once and for all that they have a right to accurate information about their social, sexual and reproductive lives.

Help us celebrate #UequalsUat5! As Prevention Access Campaign staff member Davina Conner shared, “The five years of U=U is a milestone for me, showing that with the strong voices of advocates, we can do anything as change makers.” https://t.co/NDr9uMNsUz pic.twitter.com/Ye0704xKb5

Community members are eager to celebrate. As Prevention Access Campaign staff member Davina Conner says, “The five years of U=U is a milestone for me, showing that with the strong voices of advocates, we can do anything as change makers.”

PAC Founding Executive Director Bruce Richman noted, “I’m proud of the people from every background on every continent who are lifting each other up and ensuring this transformative information is shared. It’s incredibly powerful and emotional to reflect on all that the community has accomplished in such a short time for people with HIV and ending the epidemic. More to come!”

As PAC celebrates the fifth anniversary of U=U, the disparities that have sadly been present throughout the HIV epidemic and again exposed by the COVID-19 pandemic continue to result in 400,000 people in the U.S. living with HIV not being virally suppressed. People living with HIV must have all support necessary — housing, health care, healthy food, etc. — so they are able to reach viral suppression. When we support the health and wellbeing of people living with HIV, we also fight stigma, stop new transmissions and move closer to ending the epidemic. Ensuring treatment for all means a continued action against systemic barriers to health and wellbeing: racism, classism, xenophobia, transphobia, sexism and homophobia.

The global U=U community will come together at 3:00 p.m. EDT on Wednesday, July 21, on PAC’s YouTube and Facebook pages to celebrate five years of U=U and empower advocates to continue the necessary actions to fight against health disparities and lack of treatment access so that all people living with HIV can enjoy the benefits of U=U. The event will be followed by an after-party on Zoom, and the link will be shared during the event.

Leading up to the event and during, PAC also encourages everyone to share their memories of the last 5 years of U=U.  If you have pictures, videos or other memories, PAC invites you to share them on social media using the #UequalsUat5 and #UequalsU hashtags.

For more information about the 5th Anniversary Celebration of U=U or about U=U in general, please contact Cameron Kinker at cameron@preventionaccess.org.