My Healthcare is Great (Until Something Goes Wrong)

When I found out that I was selected as a social media fellow at this year’s United States Conference on AIDS (USCA), it was one of those rare moments– after years of painstaking work on my web series, a door opens. As a working artist, I can tell you that these moments are rare.

Almost as rare as getting to meet Judith Light, one of my all-time favorite actresses! 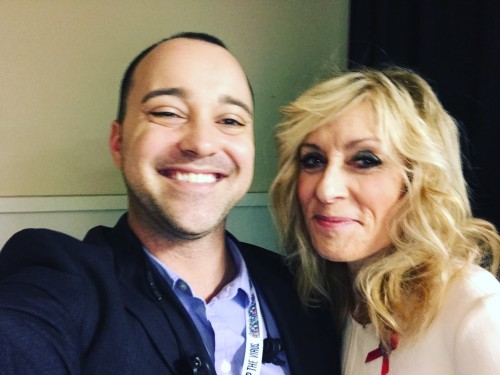 Almost as rare as my herpes outbreaks.

Yeah, that’s right. I get them. And I should be clear here: I’m actually very lucky because they happen only very rarely, always coinciding with periods of chronic stress. The last time this occurred was over two years ago—when I was preparing to go into the production phase of my web series. And here I sit, experiencing chronic pain that anyone familiar with the condition can recognize.

(I should note that the stress I had going in to my time here in D.C. is what probably set me off—everyone at the USCA has been wonderful, I’m very much with family here!)

This year’s USCA differs from previous years, or so I am told. The reasons are not surprising. In a country where health care disparities are inextricably linked to race, we have a president who has publicly sided with Neo-Nazis and white supremacists. The current administration’s efforts to repeal the ACA are not coincidental. They are simply another example of white people perpetuating the institutionalized racism of the United States, as old as the country itself.

Of course, I’m white, and I also live in Massachusetts, where Mitt Romney laid the foundation of what has evolved into the ACA. Plus, I’ve got access to medical care. And it’s not too far from my apartment. Of all the people to have a herpes outbreak at USCA, you’d think I’d have no problems, right?

I called the nurse who works with my primary care provider (PCP) yesterday, and she informed me that my PCP was out of town. In order to get a prescription, I would have to visit an urgent care center or emergency room, she told me. I asked if it was possible that I could page my PCP. My nurse responded that she couldn’t guarantee that I would get a response before next Monday—by which time, I’ll be back in Boston anyway.

I could smell which way the wind was blowing. I’m lucky I’m here at the USCA where I’m told I’ll be able to find a provider willing to write me a prescription.

But what if I was simply out of state for any other reason? My nurse blew me off. As maddening as that was, I know it wasn’t her fault. It wasn’t even my PCP’s fault. The fact is, the clinic where I go is staffed almost completely by doctors who only see patients on one day out of the week. If I have an urgent need, I’m told to go to urgent care, even if I can make a cogent case for preventative treatment. It’s not the first time this has happened, and it likely won’t be the last.

So of course I’m grateful that, at least for now, the ACA stands, and I have health care coverage. I even convinced my insurance plan to subsidize the cost of the meds I need, despite being out of state.

Still, I can’t help but wonder if this lack of willingness to help a patient out who presents an urgent and simple-to-fix need is, objectively, a symptom of a system that rewards doctors for handling the needs of privately insured individuals. A system which, in fact, creates disincentives for those who would treat lower-income folks.

I can only imagine how difficult it must be for a lower-income/queer/female/trans person living in a rural area of a state like Alabama, where clinics like the one I go to are fewer and further between. Even if they are covered by the ACA, many trans folks aren’t comfortable going to a clinic in a rural area, and would prefer to travel to an urban center for safety reasons.

I wonder if, in addition to taking a day off work just to travel to obtain healthcare, their doctors blow them off, too? I’d like to think this isn’t the case, but logic suggests that it is. And logically, the repeal of the ACA would remove their access to health care altogether– as well as my own.

So while the ACA isn’t perfect, it has created insurance for millions of Americans. It has made a dent in some of the pervasive disparities in healthcare access for Black America, which is simply unprecedented. Its repeal would be disastrous. How politicians can sell it as a good thing to anyone seems to me a perversion. Actually, I’ll take it a step further: it’s kind of a mind-fuck.

The health care debate in our country simply has to pivot away from politics and back towards social justice. As much of the western world outside our country has already acknowledged, health care is a basic human right. In the meantime, I’m headed to the lobby to find a doctor.