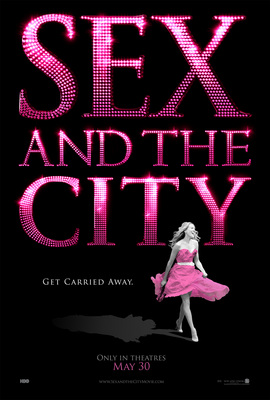 Homo: I’m a bad gay. A horrible homo. I don’t like shoes or shopping. I don’t like gossip and I don’t like hearing people talk about their feelings. And now that I’ve suffered through 2 1/2 hours of it, where can I go to get my masculinity back?

Hemo: I’m a bad straight- I love to gossip, and watched most of this HBO series with Gwenn and two of our best (good gay) friends. So of course I was there for the movie, it was somewhat of an event in our household.

I know, I’m a bad straight.

Homo: I wouldn’t have even gone to see this thing if not for you. And you said you liked it? 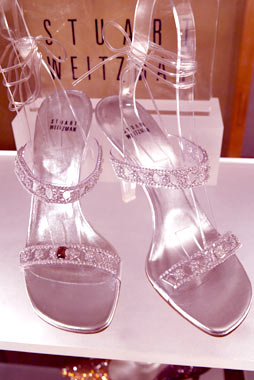 Hemo: Yes, there was humor, and remember, I’d just had the Spielberg/Lucas shitbomb of Indiana dropped on me. Maybe I just got Sex more, since I knew the characters from the TV show.

Homo: You don’t understand. I watched the series. I’m not THAT bad of a homo.

Homo: No probleemo, Hemo. But a bad movie is a bad movie. Christ. Purses. Labels. Shoes. Shopping. More shopping. More labels. More shoes. What the hell is it with women and shoes? Those horrors cost $500?? And $500 for a damn purse??

Hemo: You have to remember: most people aren’t dumping all of their money into expensive HIV medications like we are. 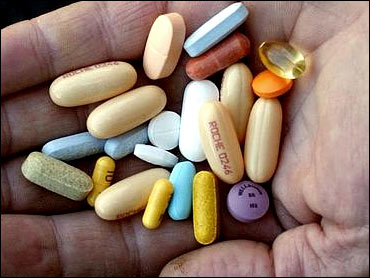 Homo: Right. Which is why I’m kicking myself for dumping money into Indiana and Sex...

Hemo: Wait, what about that next-door neighbor of Samantha’s? They showed that dude’s ass like 50 times!

Homo: Okay, you got me. Being an Internet Icon, I’d heard all about Mr. Next Door Neighbor before stepping foot into the theatre. He’s the real reason I went to see it, not because you wanted me to.

Hemo: They showed that dude’s ass like 50 times. And I got nothing! I was forced to go online and look for photos of Kristen Davis giving some guy a....

Hemo: And I’m not even sure it was her.

Homo: The straight women and gay men this movie was made for don’t care about you and your needs, thinblood. This is about us. But they did show Samantha in that sushi scene. That was kind, you know, um, fleshy? 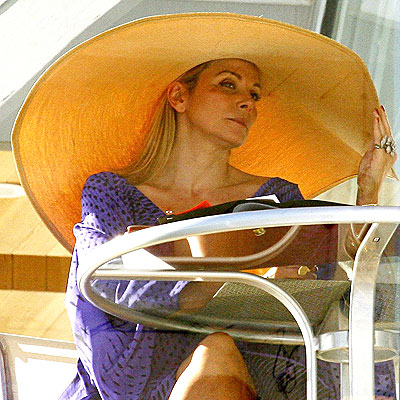 That woman deserves to make five times what Sarah Jessica gets. She should have held out for more money.

Homo: There, you got Samantha. The next-door neighbor, as hot as he was, was still a straight dude. Except for the two hot guys who kissed in the first scene, what is up with the homofaguals in this series? Why is it that the only two gay men in the cast have the worst clothing and are the most repulsive looking characters on the screen? 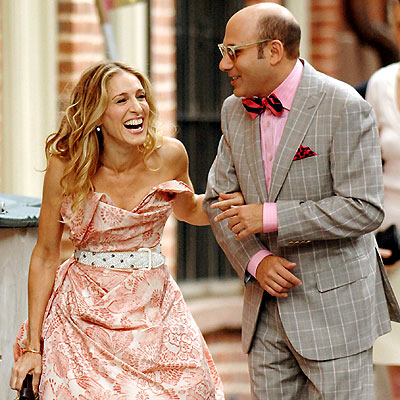 Hemo: At least the movie had gay guys in it. Hemophiliacs have been on the cutting edge of fashion for years, and how are we rewarded? By not having one thinblood in the movie. C’mon!

The last time a hemo figured into a movie plot was the vampire film, The Thirst. The vampires fed on the thinblood, then some dude starting punching them and they all bled to death.

Homo: Wait. Is that a real movie? The vampires drank the blood of hemophiliacs and then bled to death from cuts? Genius.

Hemo: It was one thinblooded girl, but yes, it’s real. Netflix it. (Careful, there are two vampire movies called “The Thirst”, the one with the hemophiliac character in it also stars Jeremy Sisto.) 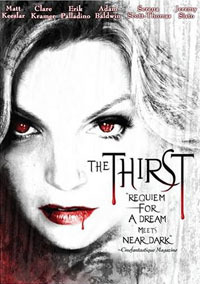 Homo: Well, I’ll tell you the truth. It wasn’t entirely my cup of tea, and I thought the plot had holes big enough to hold Sarah Jessica Parker’s wardrobe, but I have to admit it was fun seeing the four girls together again. They’re like comic book heroes when they walk together. So, I’ll give it a very mild One Vein Up But Only For People Who Like This Kind Of Movie.

Hemo: I’m with you- the characters are interesting enough, though someone with clotting deficiencies would have added a nice dynamic. Still, I give the movie One-and-a-Half Veins Up.

Homo: I do: I also give one Special Vein Up for the guy next door.

Hemo: Gee, let me guess where that vein is located. 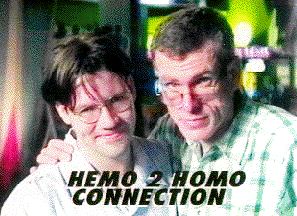 The Hemo2Homo Connection’s creators met online in 1996, and posted their first movie review in 1998. Both have been living with HIV for over twenty years, and have annoyed their friends and loved ones for longer than that. Steve Schalchlin resides in Los Angeles, CA. He is an award-winning musician, singer and songwriter. Shawn Decker lives in Charlottesville, VA. He is an HIV/AIDS educator and the author of My Pet Virus.