Sir Edmund Hillary, the mountain-climbing legend, that is. I apologize to my vast neo-con readership if anyone got unnecessarily excited upon reading the title of this blog.

Actually, my theory on the Hill is that Republicans pray that dem Dems put her through. Puddles as large as the Gulf of Mexico have been salivated by Republican think-tanks over the prospect of running against Hillary Clinton. Just last night on TV I heard some guy with a semi shouting, “What about Whitewater?!”

Would women secretly vote for Hillary in the booth, just to stick it to their husbands for that “RUSH is RIGHT” bumpersticker? I thought it was a possibility, until Barack outvoted her among women in Iowa. 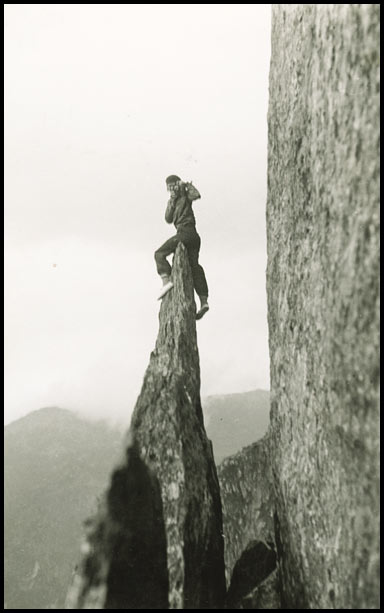 Hillary is climbing a historic mountain to become the first female President of the United States... but wait, what is that in the telescope right beisde her? On an even bigger mountain? It’s Barack Obama! He’s got a satchel busting with O Magazine, and women like the lean muscular tone on his calve muscles.

Actually, I’m not sure which mountain is bigger. And wait, what’s that in the distance? It’s Mitt Romney climbing the Mormon mountain. No, wait, it’s a private helicopter dropping him off on top. But still, his challenge in rallying the Christian base around him is just as daunting.

Oh, and there’s Dennis Kucinich. He’s short and has a statuesque British wife and his own party won’t even provide the man a booster seat in the House, much less a friggin’ mountain. But hey, his day will come when Barack remembers that the guy helped him in Iowa, and everyone knows that the Democrats need a whiter-than-light running mate for Obama or Hillary.

So, I’m switching my endorsement from Kucinich ’08 to Kucinich ’16 after eight years as a successful vice president. When climbing mountains, it’s best to use a wide lens.