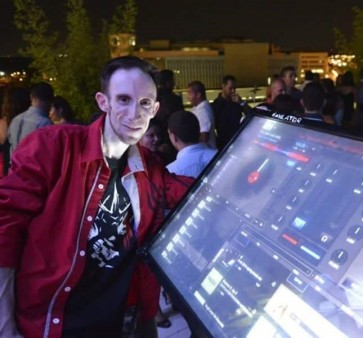 “My HIV Diagnosis Helped Me Find My Life Passion”

Contracting the virus as an infant, guest blogger Derek Canas now advocates from the DJ booth.

This guest blog post is written by Derek Canas, a DJ and advocate also known as DJ D-REK.

Social media and DJing don’t usually come to mind when you think of HIV and AIDS activism. So, let me start from the beginning.

November 1984 I made my way into the world a month early. Three months later it was discovered I had a heart condition known as transposition of the great arteries. Surgery was urgently needed. As I’m being rushed into surgery the topic of blood transfusions emerges. My family is assured everything will be fine. (Remember this is early 1985, and the world is still learning about HIV and AIDS.) I survive surgery and three months in intensive care. I’m finally home and battery-powered thanks to a pacemaker.

As the years go, by my health issues begin to compound. Yearly bouts with bronchitis and pneumonia. Doctors calmed my family by explaining that I’d always be the smallest kid due to the heart problem. The years went by and three pacemakers later I’m meeting a new doctor who’s treating me for a cough that wouldn’t go away after third pacemaker replacement. So the search begins for at that time unknown illness.

My doctor noticed I’d had multiple blood transfusions in 1985 and no record of a HIV test. Surely I’d been tested after years in and out of hospitals? But no one had ever suggested I get a test for HIV.

I submitted to the test and two weeks later I got the news I never expected. The test was positive, and I was diagnosed with AIDS. I survived 16 years undiagnosed. I had what is known as wasting syndrome—my body was preparing to die. My world shattered, and I was lost learning new words (viral load, CD4 count, etc).

In 2001, I began my journey on meds—22 pills a day. I was in awe as I watched my body begin to heal after hearing how close to death I was at diagnosis. HIV treatment works. This was empowering.

Music was my only escape from doctors and meds, so I should be a DJ. The transformation into a DJ was almost natural. I started out by just meeting DJs and learning all I could. The moment I realized I was cut out for the job was a karaoke night. I gathered up all my courage and found a song from the past, one everyone knows: “Ice Ice Baby.” I walked all through the club and put on a show like never seen before. That’s how DJ D-REK became real.

So how do I advocate from the DJ booth? I hand out wristbands for the #EndTheStigma campaign on gigs. I’ve learned the power of social media and connecting to other advocates around the world. Sharing my story honestly and not watering anything down has really connected with people, plus I throw in some humor. You have to be able to laugh—life is uncomfortable for us all, so laugh at it. I started the campaign after realizing the lack of Heterosexual advocates and knew that my voice could make a difference.

It’s wild to see how much I’ve accomplished in just 3 years. The #EndTheStigma campaign and #DreksAngelsandWarriors have become something so much bigger than me now and I’m very proud of that. I became a social ambassador for Get Tested Coachella Valley, been interviewed for multiple magazines and blogs around the world, and spoken at many events including my local college. I’m currently involved with many great projects including AIDS HIV living memorial, Positive Affirmation Day, and more.

I’m known by my doctors as the “Terminator” because I don’t stop despite all the odds stacked against me. That’s what I always remind people of: we are all stronger than the words in our medical records. Those are just words—don’t let them define you.

Find an HIV testing site near you.

Learn more about Derek at derekcanas.com