Nicole Begay is one of the first two HIV League Scholars who was awarded a $7,000 scholarship for being one of the most promising students living with HIV as evidenced by her educational accomplishments, leadership, and service. Check out what she has been up to during her first semester of college.

We are so proud of you Nicole!!

My name is Nicole Begay and I am a strong advocate for HIV and AIDS. I had the chance this year to join Aunt Rita’s Foundation in Phoenix Arizona to be a team leader for the Phoenix AIDS walk. Making a team this year is the first step for me getting out into the community and giving back to those who have made a difference in my life. The team that I created ended up with 33 members and we exceeded our goal of $1,500.00 and ended up raising $1,730.00 for HIV/AIDS. My team name is Team Naabaahii. Naabaahii is Navajo for a warrior, one who says what is in the people’s hearts. In Dine the Naabaahii were men and women who fought an enemy and/or an illness/disease. This fundraiser provides prevention education, testing, and essential services to those affected by HIV/AIDS.

Here are some photos from the event. 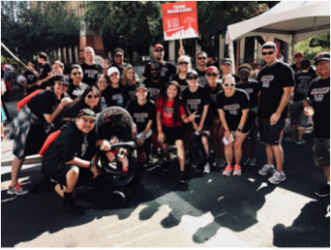 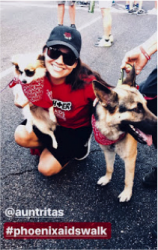 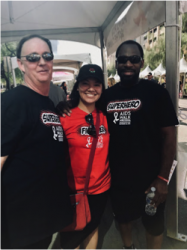 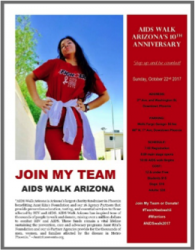 I have been speaking out at many different Jr. High schools and colleges (Including the university of Arizona) this year on HIV and AIDS awareness. Because of this experience I have had, I decided to also speak out to the city of Phoenix, a little over 700 people attended this event, hosted by Aunt Rita’s Foundation, 6th annual RED Brunch. This is an event celebrates World AIDS Day. Aunt Rita’s Foundation produces this annual fundraising brunch to raise funds for 16 nonprofit benefiting agencies that provide important services to the HIV/AIDS community. At this event I was honored to be a guest and tell my testimony to many of these VIP members of our community including the Mayor of the city of Phoenix. Below I will attach the written version of my speech along with some photos what were taken at the event.

I was 15 years old when I first became sick, which was unusual since I was generally never sick. When the doctors could not figure out what was wrong with me while I was hospitalized, they decided to run an HIV test and it came back positive. I was in shock, and my parents were in shock. Naturally, delicate conversations followed to figure out how I had contracted HIV. This is how I came to disclose to my parents how I had been raped by a family member when I was 12-years-old. This is how I became HIV +.

I began to deal with the emotional trauma of this experience, and I also began to deal with my new reality of my HIV diagnosis. Following my diagnosis, I was referred to the Bill Holt Clinic at Phoenix Children’s Hospital, where I began treatment by Dr. Piatt and a team of social workers. I can’t honestly say that I was initially happy about this, in fact I hated going to the clinic for the first year of treatment since it reminded me of something terrible that had happened to me. Now that I have dealt with that trauma, I can’t tell you what the support I received from Phoenix Children’s Hospital has meant to me. They have not only been a phenomenal medical team, they have been life mentors who have helped me in every way imaginable to help me be whole, and happy. I can’t tell you how much they have meant to me, and I’m happy to tell you that I have an undetectable viral load and am completely healthy with the help of this phenomenal team. They are truly spectacular.

I’m now attending college at Mesa Community College, and because of my own life experience and interactions with the team at the Bill Holt Clinic, I am studying to become a social worker so I can help others just like I have been helped.

There are some very special people in the room today that have been so critical to my healing. I would like to recognize them and ask them to stand to be thanked by all of you. First, in the room are two Mesa Police Officers who went above and beyond their call of duty to help track down and bring to justice my attacker, thank you – would Officers George Beck and Ken Hailey please stand up. To the entire team at Phoenix Children’s Hospital, would you please stand up – thank you for all that you have done to support me and bring me to health. And finally, a very special thank you to my Mom and Dad who are here today, I am so lucky to have you in my life – please stand up, I love you for your support and all that you have meant to me.

Lastly, I need to thank Aunt Rita’s Foundation. I was at the AIDS Walk this year and my own walk team was so proud to be there supporting me and enjoying a wonderful, wonderful event Thank you, Aunt Rita’s, for what you are doing to try and repeal A.R.S. 15-716 so that high school students can receive the comprehensive health education they need to be informed about HIV transmission and prevention. Thank you, for allowing me to share my story with you today. 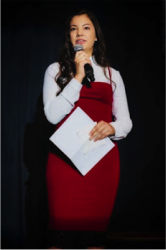 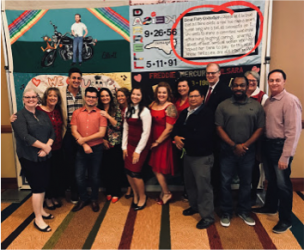 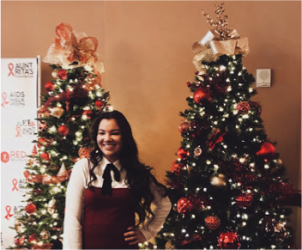 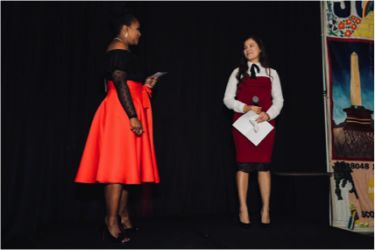