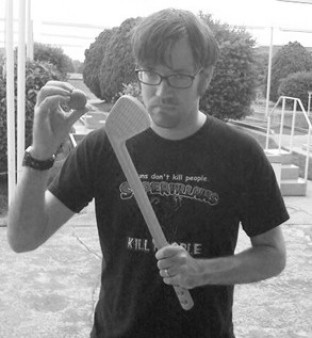 A lot of people know I’m HIV positive. In fact, it’s kind of my calling card. I’m funny dude with AIDS who cracks jokes at his own expense. Don’t get me wrong, it’s a good gig. Here’s a little real life story that happened last week.

I go to a friend’s house- who will remain unnamed- and I find him playing Halo with another friend. It’s a funny scene, because they are wearing headsets and talking to other players online. “There’s only 8 minutes left in the mission,” my friend said. I sat on the couch and, though the graphics on the big screen TV were incredible, I couldn’t take my eyes of my buddies.

They looked ridiculous. It took every ounce of restraint not to snap a picture and load it to my Twitter page. “Our friend is laughing at us,” my friend said to his comrades online, adding. “But he’s the one who has AIDS.”

It was a good line and I was impressed by the quickness and ease of delivery.  Plus, my friends know I enjoy this type of humor, and usually am the one who instigates. The gamers on the other end of those headsets must have been confused by the statement, and my retort probably didn’t help.  I rebounded faster than Magic Johnson (I have no idea if he was good at rebounds in his day) with: “Yeah- and I have hemophilia, too, and I just realized I could kick two of my friends’ ass at one time!”

This funny little tale brings me to a much bigger issue...  since Magic Johnson returned to the NBA for a season after testing positive to prove that he still had it (speaking of having “game”, not “HIV”), the positoid community has had a massive void in the Incredible Athlete division. A void I plan on filling in the sport of putt putt.

This summer, I plan on taking over the sport, one windmill at a time, and I have a friend, Ben, who has agreed to represent the entire negatoid community this summer during our matches- er, battles.

Every community has had a big showdown in which they prove they are equals. In boxing, Jack Johnson knocked out the Great White Hope in James Jeffries to become the first African American champion. In tennis, female Billie Jean King toppled the ultimate man’s man in Bobby Riggs, emasculating billions of men in bars in the process. But athletes with HIV haven’t had their sporting moment in the sun.

Well, that changes this summer, when I destroy my friend Ben. What’s best about that is I’ve already beaten him once and uploaded the scorecard to Facebook. You can see the damage from last week’s game framing this landmark blog entry for sports fans with HIV.

All summer I’ll be competing on behalf of people with HIV. And when I’ve conquered putt putt, I’ll move to another sport, maybe bocce ball.  The good thing about putt putt is that it will keep me in shape, so when there is a cure for hemophilia I can seamlessly transition into boxing and make history there, too.

Whatever sport I dominate, I will compete and carry myself with dignity. In victory—and inevitably, defeat—you will all be proud of me as I represent the fine citizens of the world who share not only my competitive drive, but my HIV status as well.