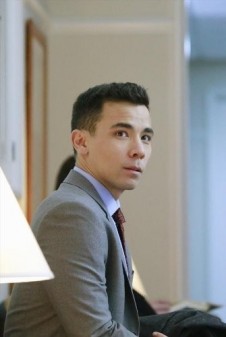 HIV on TV Sure Is Having a Moment—and We’re Not Complaining.

Thursday night on the season finale of Finding Prince Charming, Logo’s gay dating reality show, bachelor Robert Sepulveda Jr. chose HIV-positive suitor Eric Leonardos to ride off into the sunset—and maybe a spinoff?—with. They may not ooze personality, but at least HIV is not getting in the way of what seems like their real chemistry. (For more dish on those two, click here.)

And later the same night, on ABC, How to Get Away With Murder’s Oliver (Conrad Ricomora) got a juicy plot line. A quick recap: Last season, Oliver tested HIV positive and broke up with then-boyfriend Connor (Jack Falahee). This week, Oliver had to deal with disclosing his status to new beau Thomas. Stripped down and ready to get down (for their first time), Oliver comes out as HIV positive.

This sends Oliver running back to HIV-negative Connor, who since their breakup has been schooled on PrEP (on network TV!). Still in love with Oliver, Connor takes him back…at least for a night. (In case you were wondering, it was Oliver who initially ended the relationship.)

The response to both episodes has been largely, um, positive. Regardless of where you rank as a fan of either show or its protagonists, seeing HIV openly discussed and honestly depicted—the good, the bad, the meh—in fact and fiction represents a huge leap forward on television, one that, judging from the online comments, is starting conversations and inching us ever closer to stigma-free TV—and real life!