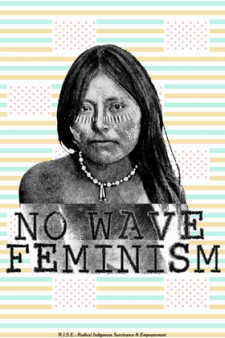 HIV/AIDS Is Quiet at Times in Native Communities 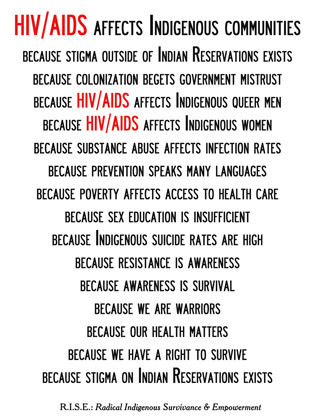 Amid the outpouring of brilliance and media on World AIDS Day, a powerful poster by Radical Indigenous Survivance and Empowerment (R.I.S.E.) was released. Using facts, design and repetition, the poster works to illuminate to the viewer the reality of HIV amid Indigenous communities, under represented in contemporary discussion of the epidemic. The text that accompanies the poster on R.I.S.E’s website quotes the most recent available stats from the CDC concerning HIV and American Indians and Alaska Natives (AI/AN), which states “By the end of 2010, an estimated 1,945 AI/AN with an AIDS diagnosis had died in the United States. In 2010, HIV infection was the ninth leading cause of death among AI/AN aged 25 to 34.”

In the interview below artist, R.I.S.E. member and poster creator Demian Diné Yazhí talks about the poster, HIV/AIDS and Indigenous power with Theodore Kerr.


Visual AIDS: The poster is very powerful. What made you create it?

Demian Diné Yazhí: I actually woke up at 4:30 in the morning and immediately had a strong desire to create a poster, and I did so through an Indigenous artist/activist collective that I am a part of, R.I.S.E.: Radical Indigenous Survivance & Empowerment. However, what inspired its creation is the absence of art production in Indigenous communities that broach the topic of HIV/AIDS. Of course, I can only make that comment through what I’ve exposed myself to while researching Traditional, Customary, and Contemporary forms of Indigenous Art. Through my research, I’ve stumbled upon less than a handful of Indigenous artists whose work intentionally addresses the affects of HIV/AIDS--either for them personally or within their respective communities.

Using the inspiration of World AIDS Day, Day With(out) Art, and the concluding of November’s National American Indian Heritage Month, I used what resources were available and began working on a large, text-heavy poster that lays out a few facts. I wanted to create a bridge that linked thriving and struggling Indigenous communities to taboo issues like HIV/AIDS. In making this poster, I also wanted to challenge other Indigenous artists/activists to speak up and create a space for HIV/AIDS within their communities and ceremonies that simultaneously take into account the impacts of colonization, disease, and government neglect in the hopes of healing. The same goes out to HIV/AIDS and Queer artists/activists: I want all of us to challenge the work we make so it includes the voices of the Indigenous Peoples of this continent. It starts with something as simple as leaning the history of the Indigenous People(s) of the city or town you call “Home”.

The mistreatment of Indigenous Peoples of the Americas is no different than what the Queer community has faced under the control of Western powers. The difference is, in the Americas we are always walking and sleeping and fucking on Stolen Land, so the struggles Indigenous Peoples endure are often forgotten or overshadowed because our population is now only 1 percent. Yet, prior to disease, genocide, and concepts like “Manifest Destiny”, complex Indigenous societies were in full swing from coast to coast. 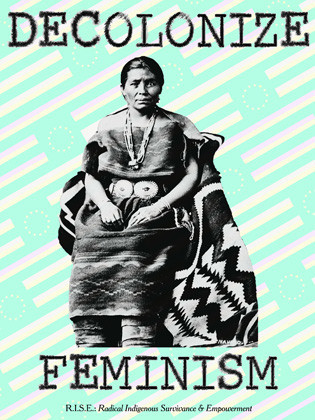 In the writing you include with the poster it is mentioned, “Of all races/ethnicities, AI/AN had the highest percentages of diagnosed HIV infections due to injection drug use.” This may be confusing for people to learn because of the reduction of HIV rates among Intravenous drug users due to needle exchange. Can you share with us some of the issues facing AI/AN when it comes to needle exchange?

This statistic surprised me as well. There are a few factors that come to mind, but it should also be noted that Indigenous communities, to some extent, have a difficult time trusting the Western Medical Industrial Complex. Not only were Indigenous Peoples forced to assimilate to Western standards of beauty, religion, language, sexuality, feminine/masculine roles, etc., but we were also forced to assimilate to the authority of Western doctors and health codes. I think we can all agree that there are some overwhelming benefits of Western medicine, but the issues that Indigenous women have experienced, like forced sterilization and lack of access to contraceptives, abortion, and rape kits, has forever tainted the perspective Indigenous communities have toward Western medicine. I would be remiss not include the fact that many Indigenous People continue to practice and benefit from Traditional ceremonies that have proven to be imperishable.

Having said that, the growing number of HIV/AIDS infections among intravenous drug users (IDUs) within Indigenous communities is likely tied to the lack of access to syringe exchange programs. Indian Reservations are often situated within the confining, colonized borders of conservative U.S. states, such as Arizona, Montana, South Dakota, Idaho, to name just a few. This means that often times these states do not have a legal needle and syringe exchange program set up, so this increases the likelihood of reusing needles; thereby increasing exposure to HIV/AIDS, as well as hepatitis B and C.
Reservations are also a hotbed for substance and drug abuse. As with any community that is plagued with racism, unemployment, poverty, or something as simple as unhealthy eating habits perpetuated by fast-“food” chains like McDonalds, the threat of exposure to unhealthy coping mechanisms is high. I recently watched a documentary on PBS (Native American Boomtown) that was making a correlation between the recent oil boom in North Dakota to the rise of gang activity and drug abuse on the Fort Berthold Indian Reservation. That’s not even taking into account the history of trouble spots like the Pine Ridge Indian Reservation or the Navajo Nation. Because of all the aforementioned factors and more, drug and substance abuse is high on Indian Reservations, and effective government programs are just not working--or finely tailored--to address the plethora of unique and elaborate Indigenous perspectives.


Can you share the meaning behind the word “Survivance” which is part of your collective’s name?

To best answer this, I turn to the definition provided by Anishinaabe scholar, Gerald Vizenor. In his writing on the issue, Vizenor states, “Survivance - is an active sense of presence, the continuance of native stories, not a mere reaction, or a survivable name. Native survivance stories are renunciations of dominance, tragedy and victimry.”

Every morning Indigenous Peoples of the Americas wake up in the colonized lands that stretch from Canada to Tierra de Fuego, and in those first few moments of the day they are making a political statement of resistance. The fact that we are still here to speak our language, or practice our ceremonies without the cruel judgment of Western religion, is a very real threat to the colonizers and big businesses that are hungry for our resources. Indigenous bodies are expendable to them and we rise every morning to prove them wrong. Those are just a handful of examples regarding acts of survivance.

The issues that R.I.S.E. is dedicated to addressing fall under the categories of decolonization, indigenization, feminism, and political activism, and we do this through curatorial inquiry, public interventions, wheatpaste/street art, and by creating free digital posters for download on our tumblr blog: burymyart.tumblr.com. Survivance is a part of our agenda. Empowering our community and dedicating ourselves to our artwork is another part. It’s a life-long battle that must be fought in order to ensure the perseverance of land and people, but also to re-establish the relationship of the people to the land. It’s not just an Indian thing, it’s a human necessity. 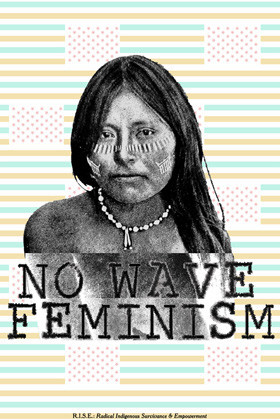 Repetition is used very effectively on the poster, what was the process like in creating the text?

Well, I woke up at 4:30 and knew I wanted to make a poster. That was my initial thought. Everything else just came streaming out of the canyon, as it were. I started off as a writer, so most of the images that come to mind are text-based. Sometimes I include photography, Native-inspired designs, and appropriated photographs or designs, like with this #decolonizefeminism series that utilizes appropriated images of Indigenous women with original text.

In this case, I started off attempting to create an image/design by paying close attention to the text layout. Originally, I was shooting for an upside-down triangle, because queerness is pretty heavily embedded in my politics. But as I started designing the poster I realized that I wanted to distract the reader by creating an abstract image that still had some resemblance of a shape. I wanted to infect the readers mind with an image that was aesthetically ridged. The use of repetition allows the reader an entry point into any line. It allows for a gradient of meaning--various entry points for the multifaceted reader--and it creates a cohesion that ties and binds all the issues addressed. It connects these issues that Indigenous Peoples face and has the potential to speak beyond HIV/AIDS, while allowing “outsiders” to consider their placement in the larger picture. Lastly, I was influenced by traditional Diné (Navajo) songs, which use repetition as a way to speak of continuity. There is always retelling, renewal, reimaging, revolution...


What has been some of the response to the poster?

Well, it’s difficult to say. When I put out a poster, I typically post it to our blog and Facebook page, so the poster goes out and into the digital world and does its own thing. Brittany Britton, an Indigenous Hupa Queer artist in Portland, Oregon, responded by including a story about her uncle who passed away 22 years ago from the disease. In the post, Britton says, “HIV/AIDS is quiet at times in native communities, which followed surrounding stigmas of queerness that also didn’t allow for his death to be acknowledged by the greater community or family.” McEwan University’s Sexual Healthy Club reposted the image and suggests that the topic needs “more than just 24 hours of attention - especially in the way that the continued colonization of land and institution, ensures that HIV/AIDS remains an issue in Indigenous communities.”

At the end of the day, Indigenous Peoples experience physical, mental, and ancestral trauma that typically is ignored in mainstream Western culture. There is still little representation of Indigenous culture in the larger society, yet you just have to look at things like organic gardening, punk rock ideology, environmental activism, and the fashion and jewelry industry to see its larger influence. There is a stigma in this country about going/not going to an Indian Reservation that is often tied to racist stereotypes, but the fact remains that you cannot engage in a dialogue of democracy, sustainability, environmental justice, or gentrification by leaving Indigenous Peoples out of the conversation. Stigma inside and outside of Indian Reservations has ties to colonization, torture, negligence, privilege, and forced religious, health, and cultural assimilation. It is our duty as human beings of this living continent to make radical changes to the way we think of history, health, creating diverse communities, and our relationship to living organisms. Hopefully we can all work together in order to ensure our own acts of survivance.