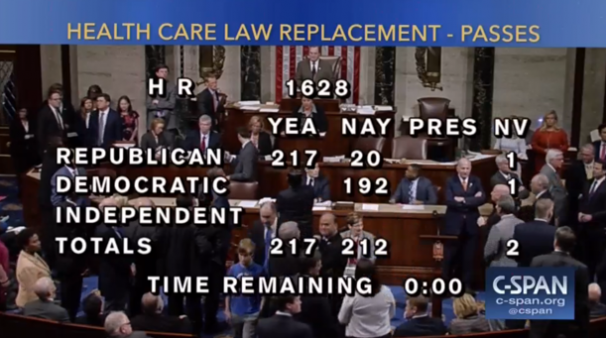 Here’s how the bill affects people with HIV—and what we think will happen to it in the Senate.

On Thursday, May 4, Speaker Paul Ryan (R-WI) brought the American Health Care Act of 2017 (H.R. 1628) to a successful vote on the House floor. Passage of the bill occurred after two attempts to pass it in March failed, leading to its withdrawal. Despite the failure, Republicans continued tinkering with the bill to find ways to pass the bill after nearly 7 years of Republican promises to repeal and replace the ACA (the Affordable Care Act, or Obamacare). They did so essentially by creating two amendments designed to appeal to the two wings of the party at odds over passage.

The first amendment, which was passed early in the day, by Representative Tom MacArthur (R-NJ), was designed to appeal to conservative Members within the Freedom Caucus and allows states to apply for waivers from the ACA’s essential health benefit (EHB) requirements. States could also seek waivers from the community rating rules. This amendment creates a loophole to the ACA preexisting condition requirements (essentially allowing insurers to charge higher rates based on health status to individuals who let their insurance coverage lapse). AIDS United expressed concern in a letter to Members of the House that the amendment would make it easier for insurance companies to raise rates on people living with HIV, people with other chronic conditions, and the elderly.

The second amendment authored by Representatives Upton (R-MI) and Billy Long (R-LA) was designed to draw in moderates. The amendment provides an additional $8 billion to fund state high-risk pools that would utilize various mechanisms aimed at subsidizing premiums and lowering cost-sharing for people who are sick or have pre-existing conditions. Aside from being far too little to help many people gain insurance, coverage in high-risk pools often has excessively high premiums, deductibles, co-pays, and limitations on benefits.

Many of the underlying flaws of the original bill also remained in the bill. For example, requirements regarding continuous coverage have the potential to disadvantage people living with HIV and other chronic conditions who may lose coverage due to the difficulty of maintaining continuous work. Loss of coverage results in a penalty requiring payment of 130% of the cost of insurance for a year once coverage resumes.

Perhaps most impactfully, the bill still ends the ability of states to expand Medicaid and transforms Medicaid into a per capita cap program from its current entitlement structure. Under these provisions federal funding for Medicaid will clearly decline leaving states in desperate search for funds to make up costs. The bill also repeals funding for the Prevention and Public Health Fund at the end of Fiscal Year 2018 and rescinds any unobligated funds remaining at the end of FY2018. Much of this funding is used for programs at the Centers for Disease Control and Prevention, and it is not clear if funding for these programs would be replaced.

An egregious feature of the AHCA is the more than $600 million in tax cuts it creates for wealthy individuals and families. These tax cuts are paid by gutting Medicaid coverage for millions of low-income Americans, including those living with HIV and other chronic conditions. Federal spending for Medicaid is projected to drop by $880 billion over ten years if the AHCA is enacted. As Democratic Leader Nancy Pelosi (CA) said in her floor statement before the House vote, the AHCA is a tax bill disguised as a health bill.

Passage of the bill occurred along party lines with 217 votes in favor and 213 votes opposed. Twenty Republicans opposed the bill. No Democrats voted in favor. The next step is for the bill to go to the Senate under reconciliation rules. The Senate’s rules on reconciliation means that many of the provisions from this bill may not be allowed since they do not directly affect the federal budget, potentially including the creation of penalties of 130% for loss of continuous coverage. AIDS United also expects the Senate to wait until the Congressional Budget Office (CBO) has scored the House-passed AHCA. The previous CBO score prior to the addition of the MacArthur and Upton amendments suggested that 24 million people would lose coverage over 10 years with 14 million people losing coverage in the first year alone. Such numbers seem likely to only increase. Although under reconciliation rules this bill cannot be filibustered, the Senate majority can only afford to lose 3 votes. AIDS United does not believe it is likely for Republicans to pass a repeal bill quickly and final legislation will look very different than the bill passed by the House. AIDS United is already encouraging Senators to vote against this bill and to focus their efforts instead on improving the Affordable Care Act.

Finally, in reaction to House passage of the AHCA, AIDS United CEO and President Jesse Milan released the following statement:

“The American Health Care Act would be disastrous for people living with HIV, potentially causing unnecessary illness and death, and moves us away from the national goal of ending the HIV epidemic,” said AIDS United President & CEO Jesse Milan, Jr. “We are extremely disappointed in the legislators who voted for this bill and who ignored the will of most Americans and the voices of people living with HIV. We will work to ensure that constituents have all the facts to hold their elected officials accountable.”