How to have sex in an epidemic: 30th anniversary

This month marks the 30th anniversary of several significant events in the history of the response to AIDS.

Most significantly, May 1983 is the 30th anniversary of the discovery of HIV.

In the May 20th, 1983 issue of Science, Francoise Barre Sinnossi and her colleagues at the Pasteur Institute in Paris reported that they had isolated a virus from the lymph nodes of a patient with signs and symptom characteristic of AIDS.   This was how the virus, a retrovirus they named LAV, was announced to the world.  Its name was changed to HIV a few years later.

2013 is also the 30th anniversary of several other events that represent achievements by people with HIV.

A small booklet called “How to Have Sex in an Epidemic” appeared in May 1983. It was written with two HIV positive patient collaborators of mine, Michael Callen and Richard Berkowitz. 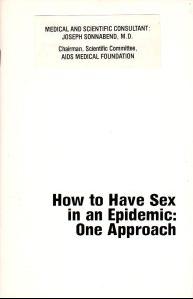 The entire booklet can be seen at Richard’s website.

In 2008, Professor Merson and colleagues in an article entitled “The History and Challenge of HIV Prevention” wrote the following:

“That year (1983), two publications that are now seen as having invented so-called safe sex were issued: the pamphlet Play Fair! produced by the activist group Sisters of Perpetual Indulgence, and How to Have Sex in an Epidemic: One Approach, which advocated condom use and self-empowerment and laid the foundation for a generation of prevention approaches to follow”

At that time the cause of AIDS was unknown; isolation of the virus, yet to be named HIV, had only been reported in the same month that our booklet was published.   But by then we did know that AIDS was sexually transmitted, that exposure to body fluids was involved. We had good reasons, if not proof at that time, to believe that semen was a major vehicle of transmission.  We did not then know what it was that was being transmitted.  Was it a new virus or repeated reinfections with something known?    I had extensive experience in caring for gay men in New York, for three years before the epidemic was recognized in 1981; my patients were among the very first to become ill. Because of this experience, and because I was also a well-trained microbiologist with an interest in cytomegalovirus - CMV, I thought it possible that repeated infections by CMV, found with very high frequency in the semen of sexually  active gay men, could play a role in disease development1.

Even if we didn’t have the answer to the question of what it was that was being transmitted, we felt that it was justifiable to recommend condom use, which could prevent transmission either of an as yet unrecognized new virus, or repeated infections with a known virus.

Our booklet was not the first to recommend condom use; this first appeared in a pamphlet put out by The Sisters of Perpetual Indulgence in San Francisco in 1982.

A more detailed account of how we came to write How to Have Sex in an Epidemic (HTHS) can be seen HERE.<

HTHS originated entirely in the community of people with and at risk for AIDS, from individuals with no organizational affiliation.   It was made possible by a $5,000 donation from Randall Klose, who should be remembered for this, as well as for his support of so many worthwhile projects.  Michael added a tax refund from the IRS to Randy’s contribution.

Having written the booklet we had copies printed and bound and then did our best to distribute the booklets, even leaving copies in bars.

I rented a mail box on Greenwich Avenue and opened an account for our publishing venture which we called News from the Front.

Our efforts were met with a great deal of hostility, as well as with expressions of gratitude.  I still have a box of letters from all over the US and some from elsewhere, thanking us in different ways. There were probably different reasons for the hostility.  Some saw condoms as a means to facilitate sex in perilous times. The properties ascribed to the then theoretical new virus included a very high degree of infectiousness, such that a single exposure would lead to infection, and that the infection would always be fatal.

There is a link above to something I wrote about our work on the booklet, that includes the following:

The three of us shared a belief in the importance of sexual expression as a vital human need. It was particularly important, that at a time when it could be associated with the possibility of such dreadful consequences, sex itself be defended as one of life’s joys. Michael and Richard were able to do this in their writing. Theirs was a perfect writing partnership, and the three of us had an easy and fluent collaboration. The booklet, in addition to describing the theory on which the proposals were based, describes specific sexual acts very explicitly and suggests ways in which they can be safely performed. There are additional essays on issues such as Should Aids patients have sex? and Guilt, Morality and Sex Negativity.

To be sure, if we had not suggested condom use, it would have been proposed some years later. (2013 comment:  The following assumption is probably incorrect) This almost certainly would have been a harm reduction proposal, although the concept of harm reduction had not yet been articulatedThe primary prevention message would most likely have been abstinence outside a stable relationship, but if one were unable to achieve this, a condom would be recommended. Thus this likely scenario would not have been supportive of sex and might have had a particularly negative impact on some gay men, and indeed on anyone engaging in sex outside marriage. Perhaps the most valuable contribution of How to have sex in an epidemic was its ability to propose condom use in a manner that was able to celebrate sex. It clearly recognized that it was not sex that caused illness, but sex with a person who was infectious

In 2003 Richard published " Stayin Alive. The invention of safe sex "in which he describes the interaction between the three of us and the process of writing the booklet.

The history of HTHS is also covered in the movie:  “Sex Positive”.

There are two other 30th anniversaries this year related to the publication of HTHS.  While writing the pamphlet Michael and Richard were also working out of my 12th street office helping to establish the AIDS Medical Foundation (AMF).  The incorporation papers were prepared by a lawyer patient of mine and his partner and on the 27th April 1983 the AMF came into being, just weeks before HTHS appeared.  One of the first actions of the AMF was to provide fiscal sponsorship for Randy’s donation, supporting work on HTHS.   We placed inserts into the booklet soliciting donations to the AMF.

The other 30th anniversary that should be commemorated in 2013 is the formulation of the Denver Principles.  This happened in June, 1983.   Both Michael and Richard were signatories.  Richard is now the only surviving signatory to the Denver principles.  Michael and Dan Turner wrote an account of the formation of the PWA self-empowerment movement which can be read HERE.

HTHS, the creation of AMF, and the articulation of the Denver Principles were all manifestations of PWA self-empowerment.

1: Early evidence for a role for CMV included the following:  Most adults will have been infected with CMV.  But among gay men attending STD clinics in the 1970s prevalence of CMV antibodies was about 90% compared with a 54% prevalence among heterosexual men.  CMV could be isolated from the semen of about 40% of a cohort of gay men followed in New York in the early 1980s.  By 1981 we knew from studies in the transplantation field that CMV among herpes viruses has an important property.  Reinfections with CMV can occur, and in 1983, given the high prevalence of carriage of CMV in the semen of gay men, the prevention of CMV reinfection was one theoretical reason to propose condom use.

We now know that CMV, and other herpes viruses interact in multiple ways with HIV.

Here are some links to a description of these interactions.