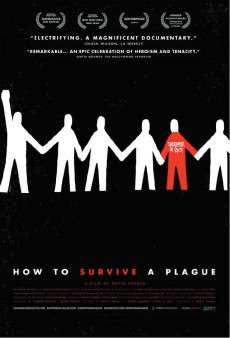 Eye of the Tiger: How To Survive A Plague

Watching the new and highly-acclaimed documentary How To Survive a Plague was very strange for me. I think that’s because the film’s story -- the fierce battle against the AIDS epidemic that was fought in the late 1980s and early 90s by AIDS Coalition To Unleash Power (ACT UP) and its offshoot the Treatment Action Group (TAG) -- is my story. Not mine exclusively, although I was interviewed for the film and show up in it from time to time (usually in the guise of a much younger man), but of me and a whole army of friends and colleagues, some now dead, many still with us.

One of the visceral things the film brought back for me is the rage that is still almost as fresh as the days when I first discovered it. Footage of virulently homophobic North Carolina Senator Jesse Helms reminds me even today of how much I hate (present tense) this man. I found out he’d died a few years ago when a ’porter called me to ask for a comment, and while usually I’d ask for fifteen or twenty minutes to compose my thoughts, on this particular occasion it came slipping out before even I knew what I was saying. “It’s too little, too late.” I wanted him to suffer, and I deeply regret that the last few years of his vicious life were spent deep in the fog of senile dementia, leaving not enough consciousness for genuine suffering. His colleagues, including New York’s John Cardinal O’Connor, Mayor Ed Koch, the Reverend Jerry Falwell, Patrick Buchanan, even the low-level Reagan press staffer who, in a transcript of an early White House daily briefing, is asked about AIDS, and reduces it to a smutty joke worthy of a quick chuckle. Karma be damned - I hate these men, and probably will until the day I die.

Not long ago, a group of us oldsters were reminiscing, and someone brought up the highly controversial demonstration we held at St. Patrick’s Cathedral in NYC, at which my then roommate, a former altar boy, crushed one of the sacred cookies and threw it onto the ground. We’d taken quite a bit of guff for that demo, and ever since many had questioned whether it was a needless sacrifice of public sympathy. “Do you guys regret that demo?” someone asked, and my friend Patrick did not hesitate a second: “God no. I’d burn the fucking thing down tomorrow if I could.”

Of course it’s also impossible to see so much footage from so long ago without feeling sadness. We lost so much and so many. But somehow it’s different this time. It used to be that I could not look at photographs or films from that period without my eye searching through the faces for the dead. Very quickly, all that grief would become overwhelming, and would rack my body to an extent that was physically painful. But watching How To Survive A Plague I realized that those days seem to be over. I still feel a tug when I see the faces of Howie Pope, or Rand Snyder or David Feinberg. It’s not that I’ve become callous towards it all but now when I see them, I remember other things than just the awful ways they died. The grieving is more-or-less done, and I can remember the things that made me love these men in the first place. It’s an enormous relief.

Which brings me to something that I think director David France, another long-time friend, captured in How To Survive a Plague in a way that no one else writing or making movies about ACT UP has understood: the sheer joy inherent in the whole thing. Some of the best people I have ever known I met in ACT UP: decent, courageous, strong, brilliant people committed to changing the world for the better even if they weren’t themselves going to be around to enjoy it. We laughed so very much -- the group of activists dedicated to haranguing the New York City Health Commissioner, for instance, called themselves “Surrender Dorothy” -- we sang, we made love (it was no secret that for some time, ACT UP meetings offered the best cruising in all of New York City) and we very consciously tried to make sure that, when the plague was over, there would be something left that would have been worth preserving.

The first time I saw the movie, spotting the marvelous Garance Franke-Ruta at a massive demonstration at the National Institutes of Health wearing a hat in the shape of a medicinal molecule and trimmed for emphasis with dollar bills, made me laugh so loudly I thought I would lose it. If I have one piece of advice for young, aspiring activists, it is to always hold on to the joy, always make it fun. If you lose that, you have lost the whole battle.

Catch a screening of How To Survive A Plague