The HIV Question on Couples Therapy 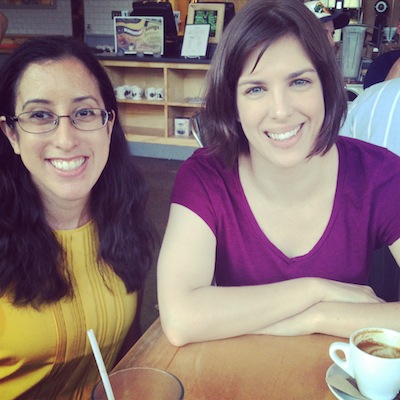 Nina and Gwenn catching up over coffee in September.

Last week I tuned into Couples Therapy on VH1 because I’d heard that Bob Bowers would be making an appearance. I’m a huge fan of the One Tough Pirate, former POZ coverboy and current HIV asskicker. Though it wasn’t the episode my beloved longtime activist friend was appearing on- HIV was a central theme, as one of the castmates revealed their HIV status publicly for the first time.

Evel Dick is no stranger to reality TV- he has appeared on Big Brother twice, winning season 8 and leaving season 13 early due to personal reasons. The personal reason being that his blood test for HIV (a requirement for Big Brother contestants) came up positive. On Couples Therapy, Dick’s girlfriend wasn’t comfortable with his wanting to come forward with his secret.  I recognized his despair; he was in that undeniable moment when you can’t fathom another day trying to ignore something that is literally a part of your biology. You have to break out.

During his session with Couples Therapy’s resident therapist, Dr. Jenn, he was asked how he contracted HIV right off the bat. I wasn’t thrilled with the question, neither was Gwenn (my partner who, like Dick’s partner is HIV negative). About a week later, my good friend Nina Martinez, who has been HIV positive for most of her life, started a discussion with Evel Dick and Dr. Jenn on Twitter about the question of how HIV was contracted. Gwenn joined in and I soon followed.

So, without further ado, I’m going to pass this one on to my guest blogger, Nina, who has gone through the trouble of organizing a Twitter conversation and making it readable. There are also links to the show, and her thoughts on why the question (and answer) to “how did you contract it” was bothersome. It’s a must-read in my opinion and I really appreciate Evel Dick and Dr. Jenn’s willingness to share their perspectives with us.

This is best viewed by opening this PDF: “How You Talk and Ask About HIV Matters” by Nina Martinez (PDF) (Or click the tweets that are just a tiny sample of the conversation!) 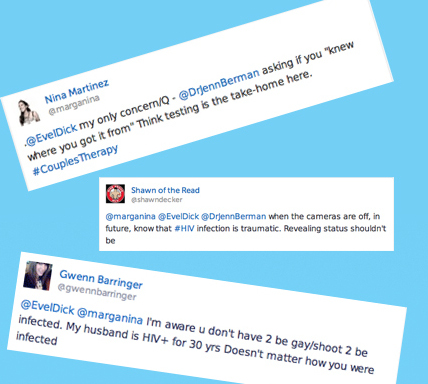 There ya go! Okay, now that you heard from Nina and everyone involved, I just want to end by saying that, yes, how we discuss HIV in private and in public ultimately matters. For the newly diagnosed it’s tricky territory juggling the raw emotions of testing positive with an unknown etiquette. I know, I made quite a few mistakes when my desire to speak out preceded my understanding of the various landmines on the field. Professionals, like therapists, doctors and nurses, also need to be sensitive to HIV’s social ramifications- which often overshadow the medical reality of living with the virus and is what keeps people silenced who are living with it.

I hope Dr. Jenn reads this blog entry and gets why the bluntness of the question is problematic at best and traumatic at worst for a lot of people with HIV. And I wish Dick all the best in this new phase of his life that includes living openly with HIV.  I hope he and his partner really dig in, get informed on actual transmission rates for serodiscordant couples (astronomically low) and realize that their relationship can be a safe, intimate and loving one.