Twitter
Facebook
Pinterest
Tumblr
Email
Advertisement
Yup.  I have joined the over 50 million Americans who do not have health insurance, but not of my own volition.  My private health insurance dropped the dead weight- me- at the end of last year.  Here’s how it all went down...

Let’s start at the beginning.  I was covered under my father’s health insurance and, due to hemophilia, I was considered disabled as a child. That means that I was supposed to be covered for life, even after his retirement in 1999 from his state job.  At the time, I’d just moved into my own place, and Gwenn I had fallen in love.  Also, I was very sick and unaware of any of the logistics of my health insurance.  My main priority was getting my health back on track.

Somehow, the “covered for life” thing fell through the cracks with my father’s employer and Blue Cross.  As a result, I was off my father’s insurance, and instead of righting the wrong, Anthem Blue Cross Blue Shield decided to cover me under an individual policy. Over the course of ten years, I was hospitalized twice, but based on my fairly high monthly premium ($1200) the company was actually making money on me, not losing it...

During World AIDS Week in December, my busiest time of the year, I was late with my monthly payment by a few days.  The payment was made, then a couple of weeks later when Gwenn went to pick up my HIV medications, the pharmacy informed her that I wasn’t covered.  We called, and Anthem said reapplying was easy.  We filled out all the info online, and then...

I was told it wasn’t due to HIV- it was because I’d been exposed to hepatitis C in 1994 and had hemophilia.  Even though I’ve never had any problems with hep C, and that five years ago my doctor told me I was a non-progressor due to how many years I’d been infected with hepatitis C with no signs of increased liver enzymes or damage.  They’d probably had me on a shortlist of chumps to be dumped, and jumped at their first chance to get rid of me.

So now I’m uninsured.  I should probably be scared, but I’m not.  On a spiritual level, I feel relieved to no longer be associated with corporate thieves.  Sure, they covered me well when I was in a jam, and didn’t screw me over except for the fact that they didn’t honor the “covered for life” portion of my father’s policy and financially raped my beloved commonwealth of Virginia each month in my name. 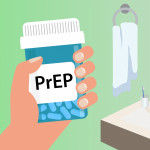