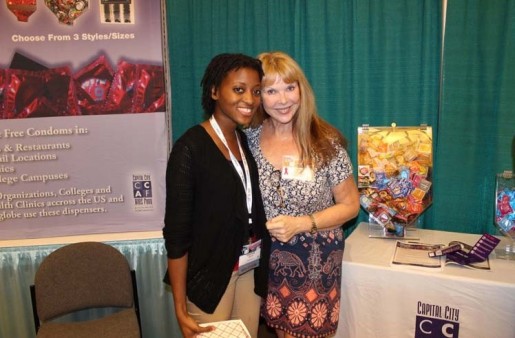 The Inspiring Story of a Youth Scholar’s Unexpected HIV Test

This is why Capital City AIDS Fund provides scholarships—and condoms.

Travelling to the U.S. Conference on AIDS to be with like-minded people is always a thrill. My organization sells condom dispensers. We re-invest what little we make into giving free dispensers and condoms back into our community. We know condoms help prevent new HIV infections.

Carrying that message has taken me to AIDS conferences all over the country. Returning from the 2017 conference in Washington, DC, I’m still filled with hope. When people gather around this pandemic to share what’s working—and what isn’t—we learn from one another.

Alarmingly, about half of all new HIV cases are among youth; what’s more, and 60 percent of HIV-positive young people don’t know they’re living with the virus. As president of Capital City AIDS Fund (CCAF) in Sacramento, I oversee an aggressive HIV prevention and education campaign launched in 2005 targeting youth.

We’ve installed dozens of free condom dispensers in northern California bars and colleges that include educational posters on the front. At the annual U.S. Conference on AIDS (USCA), CCAF displayed its patented dispensers now being used around the globe.

At the San Diego conference a few years ago, a vibrant young woman named Charesse Ahmed tracked me down at our booth. In her third year of college, she wanted more information about our CCAF scholarship program for HIV-positive students. Created in 2002, the fund has raised and distributed to students nearly $200,000.

Shunning the stigma that prevented family from talking about the cause of death, Charesse found a mission. In her mother’s memory, she became an HIV/AIDS outreach worker. She also did HIV testing.

Then, one night at home alone, she whimsically decided to test herself. Awaiting her results, she was not prepared for what would learn. Her test came up positive for HIV. She had apparently been born with the virus.

When Charesse told me her story, I hugged her with my soul. Today, Charesse is receiving treatment, she’s healthy, and one of my star pupils, currently on a Fulbright Scholarship in Mbabane, Swaziland. Next, she’ll pursue a master’s degree.

I beam as I write about these two students. Both were kind enough in San Diego to share their stories on camera with me. The video was streamed on the website of the U.S. Conference on AIDS. And it truly sums up why I do this work. To save and enrich lives.