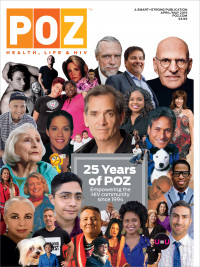 As we highlight in the April/May POZ issue, POZ turned 25 this year. We commemorate this momentous occasion, though we hoped it would never come. The plan was always to have beaten HIV by now. But as the battle continues to rage, we persevere in doing what we can to serve the community of people living with and affected by HIV/AIDS.

POZ Personals was another one of those small steps forward. Launched in 2005, it provides a stigma-free platform for people living with HIV and those who support the community to find one another—whether you’re looking for love or just a friend. You can include a picture, the year you were diagnosed, your favorite TV shows or not. As a member, it’s all up to you.

Another one of those small steps forward was the POZ Community Forums. Originally launched by Peter Staley as part of AIDSMeds.com, it was rebranded as a POZ product and upgraded to its current platform after our merger in 2005. The Forums remain a round-the-clock discussion space for people with HIV/AIDS, their friends/family/caregivers and others concerned about HIV/AIDS.

We often receive questions in the POZ Personals support inbox (personals@poz.com) from users seeking advice on how to deal with this or that. Or sometimes they just want to bounce something off someone facing a situation similar to theirs. This perfect example came in the other day:

“I would like to be able to get advice on my HIV condition and maybe chat with others in the same position as myself. But not sure how I can do this?”

We are always happy to introduce them to the POZ Forums. And now you know about this 35,000-plus community too! So are you looking for someone to talk to about something that has nothing at all to do with dating? Pop over to the POZ Forums. The forum moderators and members are around 24/7 (the whole world uses it) and happy to help with whatever is troubling you. Or if you have kindness to share, join in and help someone else looking for answers.