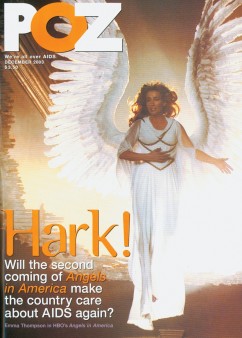 A Jaw-Dropping Oral History of “Angels in America”

Playwright Tony Kushner’s now-iconic masterwork Angels in America, set during the mid-’80s AIDS epidemic, premiered 25 years ago this summer as a relatively modest, grant-endowed production at San Francisco’s tiny Eureka Theatre. Within a couple of years, the two-part, seven-hour play had relocated to Broadway and grown into a popular and critical behemoth, winning seven Tonys and the 1993 Pulitzer Prize for Drama and invigorating both American theater and the national discussion about AIDS. (A star-studded 2003 HBO miniseries based on the play and directed by the late Mike Nichols was also an award-winning hit and the subject of a December 2003 POZ cover story.)

In honor of Angels’ silver anniversary, Slate has rounded up everyone from actors Meryl Streep, Joe Mantello and Jeffrey Wright to director George C. Wolfe, critics Frank Rich and Ben Brantley, and the play’s auteur himself for “Angels in America: A Complete Oral History,” featuring remembrances that range from the mournful (just about everyone involved in the early productions had lost loved ones to AIDS) to the hilarious (Marcia Gay Harden insisting on wearing a frumpy wig as the Mormon wife against director Wolfe’s protestations). Those involved also dish on all the behind-the-scenes drama—creative, financial, personal—that characterized the play’s transition from draft to workshop to the full-blown phenomenon Streep describes in the oral history as “the Hamilton of its time.”

Set in the pre-protease inhibitor Reagan-era and fueled by the fierce spirit of ACT UP, the boldly political play’s sprawling plot focuses on a gay man battling AIDS with the help of his flamboyant nurse after his lover leaves him, plus a pill-popping Mormon wife and her closeted husband. It also features historical figures Roy Cohn, the closeted gay lawyer who helped steer McCarthyism; Ethel Rosenberg (as a ghost); contraband AZT; an angel; and more! The play’s exploration of such weighty themes as homosexuality, religion and AIDS and sometimes graphic depictions (Kushner recalls thinking, “I don’t want this to just be about AIDS. I want people to see AIDS.”) helped usher in a new age of heady nonmusical theater on Broadway and launched the careers of many.

A lot has changed in the 25 years since the play’s premiere. In America, HIV is now largely a manageable chronic disease and gay people have the right to marry. But as many phobias still so often prevail and as different minorities continue to be under siege, this oral history serves as a reminder of all the work that goes into making great art—not to mention the need for angels in any era.