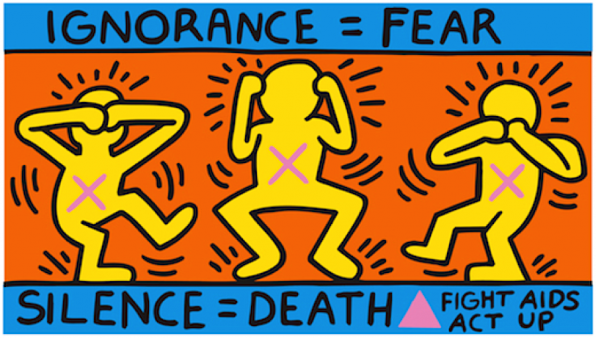 Keith Haring died 25 years ago this month, but his work remains as relevant—and racy—as ever.

Keith Haring died of AIDS complications 25 years ago, on February 16, 1990, but his art and legacy are very much Alive, Alive, Alive! I’ve enjoyed his work since I was a teenager in the late ’80s, and it’s still a joy whenever his iconic imagery pops up in my life.

Which is all the time.

For instance, as I type this blog, one of Haring’s “Ignorance = Fear” posters for ACT UP (pictured above) hangs in the office of my managing editor, Jennifer Morton. Earlier this month, GMHC’s art exhibit at the Leslie-Lohman Museum honored his legacy. And in December, I got a dizzying look at an NSFW Keith Haring mural that celebrates a pre-AIDS, gay sexual utopia.
His work is by no means limited to the HIV and LGBT communities. It’s for everyone and enjoyed by everyone. Why does it remain relevant and popular? I posed the question to Julia Gruen, executive director of the Keith Haring Foundation, and here’s what she said:


“Twenty-five years after his death at 31 from AIDS-related illnesses, most of the issues that plagued the world during his brief lifetime are regrettably still with us. Thus, his work remains of continued relevance and (we hope) continues to bring enlightenment to all audiences. And for the younger generations, it doesn’t hurt that certain contemporary public figures and celebrities collect his work, or are seen in films, or on video and TV wearing apparel bearing his imagery—including Madonna, Lady Gaga, Rihanna, Alicia Keys, Kanye West and Beyoncé, to name just a few.

“That Haring’s sexual identity, imagery, activism and charitable efforts have always been part and parcel of his public profile go without saying. But in the 25 years since his passing, the advent of the Internet and social media have changed the world in ways even Haring himself could not have anticipated. The explosion of interest in both contemporary and street art, the changing face of the AIDS epidemic, marriage equality, LGBTQ rights, gender politics, racial tensions, climate change, environmental concerns, animal rights, poverty and inequality—to name but a few hot-button issues—keep relevant the Haring Foundation’s mission to deliver Haring’s messages of tolerance, generosity, accessibility and his unwavering belief in the artist as activist, to a global audience. For those who are intrigued by his art, the causes he believed in and supported (or fought against), the ability to reach this massive audience further cements Haring’s legacy as one of the most influential artists to emerge from the 1980s downtown communities of visual artists, musicians, designers, dancers and performers of all stripes.

“Haring’s continued popularity [is also] a result of his foundation’s commitment to keeping his work, his activist ethos, sexual politics and philanthropy in the public eye, via museum exhibitions, significant grant-making within the sectors established by Haring himself, and the global licensing of his imagery, which together continue to engage, educate and inspire the younger generation.

“While always a bit startling, individuals often send messages and inquiries to us that open with, “Dear Mr. Haring...” On innumerable occasions, our Twitter feed includes posts commenting, “I didn’t know Keith Haring was dead.” Perhaps that is the greatest compliment of all...”

Wow. His art is so relevant and pervasive that people assume he’s still here creating it. That’s amazing. And folks at the foundation do a great job of keeping Keith Haring “alive.”

Do you want to get to know Keith better? Then follow his Tumblr blog, where every day, the foundation posts a page from his journals. The entries are super fascinating and intimate. For example: 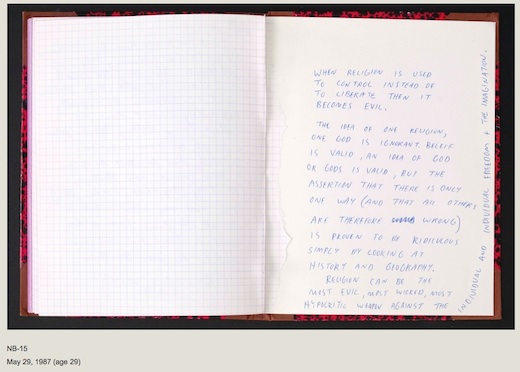 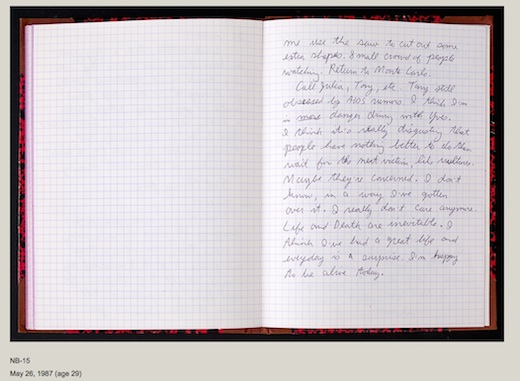 The last two sentences read: “Life and death are inevitable. I think I’ve had a great life and everyday is a surprise. I’m happy to be alive.”

No wonder people think Keith Haring is still around. In many ways, he is. 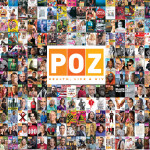