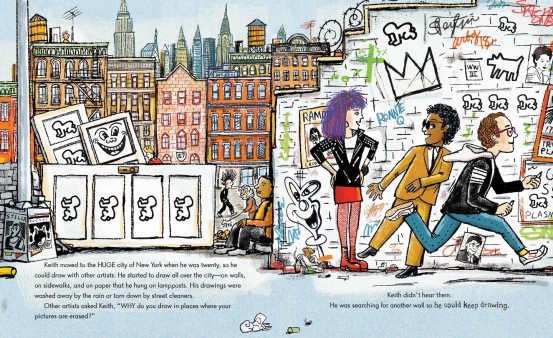 This adorable children’s book by his sister offers an inspiring answer!

Attention, Keith Haring fans: Kay Haring, younger sister of the beloved artist, who died of AIDS-related illness in 1990 at age 31, has written a children’s book about her brother.

In the author’s note at the end of the book, she explains, “I wrote this story to answer the question I’m always asked, ‘What was Keith like as a kid?’ The answer is, ‘HE WAS ALWAYS DRAWING!’” 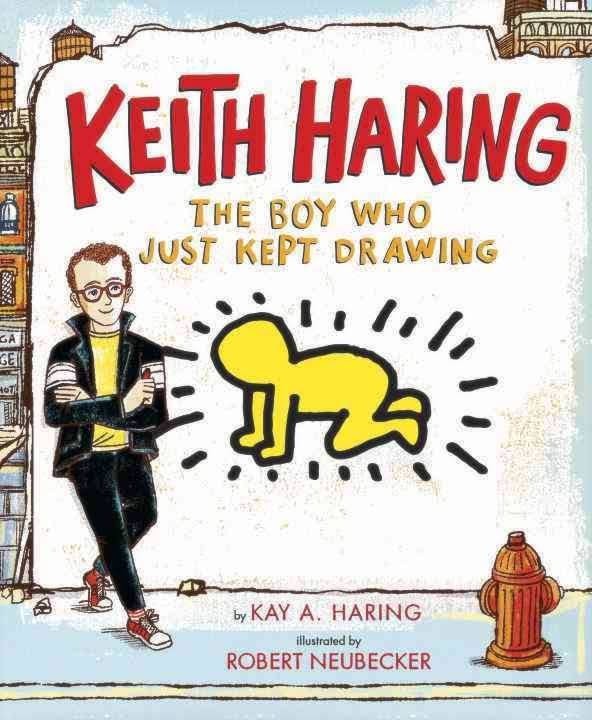 Hence the title and running theme of Keith Haring: The Boy Who Just Kept Drawing. In very broad strokes, the story recounts Haring’s biography. It’s illustrated by Robert Neubecker but also includes several works by Haring, including doodles and drawings he made while in elementary school and a painting from high school that won first prize in an art contest. As the book tells it, a couple offered to buy the drawing, but Haring said they could have it for no charge. Why didn’t he take the money, his sisters asked. Because … he just wanted to keep drawing, of course!

Through its storytelling, the book offers wonderful life lessons that Haring himself lived by. Such as? That it’s OK to break the rules sometimes (why not draw in the margins on your math test?) and that art should be accessible to everyone, regardless of fame, wealth or age. 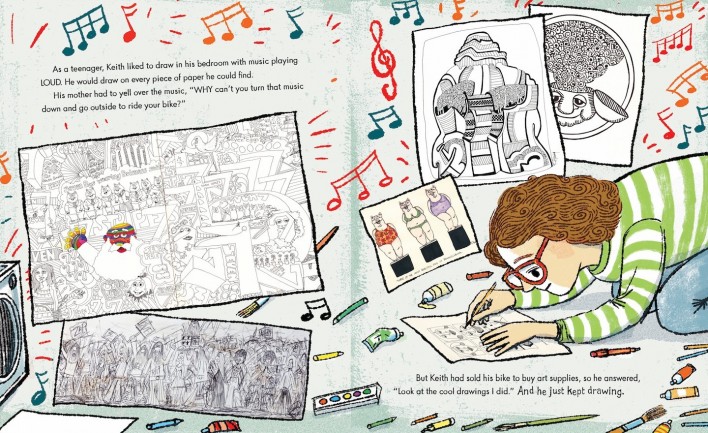 Pages from “Keith Haring: The Boy Who Just Kept Drawing” include artwork from his youth.Penguin/Dial Books For Young Readers

Politics, sexuality and HIV/AIDS don’t play a role in the book’s main telling of Haring’s life. Instead, they’re mentioned in a brief bio at the end. And that feels more than appropriate, especially given Haring’s devotion to making art for and with children.

I’ve always been a fan of his, shall we say, more adult work—like his famed bathroom mural at the LGBT Center in Manhattan (check out my video of it here)—so I particularly enjoyed the book’s insider nods to ’80s New York. For example, picking out Andy Warhol amid the crowd scenes and discovering Kenny Scharf’s graffiti tag and Jean-Michel Basquiat’s three-pointed crown symbol (the latter two appear in the sample illustration at the top of this blog post!).

Basically, Keith Haring: The Boy Who Just Kept Drawing is fun stuff for everybody. 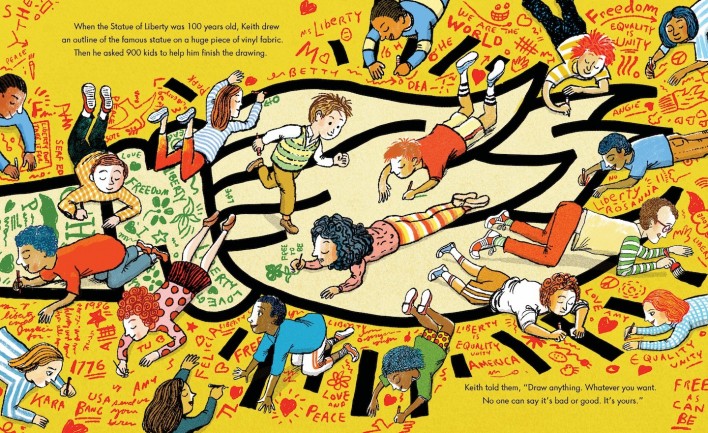 An illustration from “Keith Haring: The Boy Who Just Kept Drawing”Penguin/Dial Books For Young Readers

For a related POZ blog, read “Keith Haring Is Alive! (It’s No Surprise People Actually Believe This).” And for more articles, click on #Keith Haring.