Khafre Kujichagulia Abif: ’I will be a challenger to policies and practices.’ 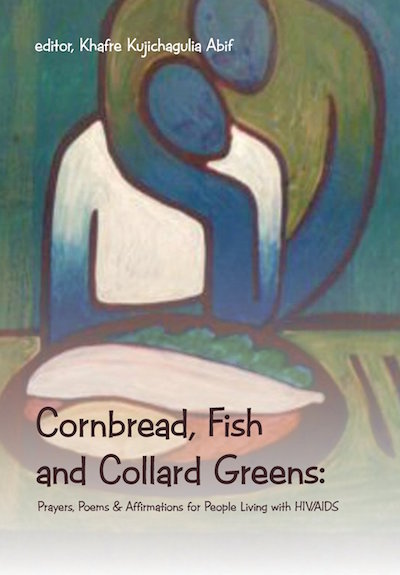 Khafre Kujichagulia Abif is an editor and poet whose Cornbread, Fish and Collard Greens: Prayers, Poems & Affirmations for People Living with HIV/AIDS is a 616-page tome that brings together over 100 contributors whose writings touch on HIV/AIDS. The publication is available for purchase here. Here, Abif speaks with Visual AIDS about the importance of this wide-ranging collection.

Describe the initial inspiration and process for putting together Cornbread, Fish and Collard Greens.
In 2010, two very dear friend and warriors in this fight against HIV made their transition. They were both long-term survivors. I sat in quiet contemplation to ask my God, “Why am I still here?” I began to receive the answer. It first came with the vision of Cycle for Freedom, which I am still working towards.

The assignment for the anthology came later, in 2011. The assignment was to assemble this collection of words to combat the words that are so often heard spoken to people with HIV. I reached out to writers and poet I had relationships with, developed a call for submissions, then used social media to push the call out to the collective community to respond. When I began the project, I had in mind what I wanted it to be, to look like; however, after about a year the submissions were not coming in as I had hoped. I spoke to an elder (a woman who as has shared my work and struggle for personal freedom) and she shared with me that it will be complete when it is complete. After that discussion I let go of my thoughts on what I wanted and let spirit have its way. The results were published in September 2013 as a collection of works from the 125 contributors. The collection has contributors from South Africa, Zimbabwe, Rwanda, Nigeria, Spain and Italy, with their respective languages in English translations.

What are a few of your favorite works from the anthology, and why?
“Wholeness” by Rev. Nazim B. Fakir, my former college roommate, who is one of few faith leaders who cared enough to submit a prayer for this project.

“New Day” by Tasha (Lady Dred) Dancy. This affirmation of a new day is central to the message this project wants people living with HIV/AIDS to hear, and embrace.

“I Sing” by Sekou Kofi Abif. This piece is from my youngest son and it shows his unconditional love for me, his Baba, and for the sincere love of the collective community.

“Who Can I Tell?”, my own work. I stand in my truth when I share personal pain and triumph. exposing myself fully and allowing others to know they are not alone.

A vast community of voices provided words for the anthology. How did you go about compiling these pieces of writing, who is the community given voice within the pages of the publication, and how has building this community affected you?
The anthology includes work from my sons, Sekou and Ture; established and emerging authors Alfreda Lanoix, Serena T. Willis, Samiya Bashir, Nikki Grimes and Reginald T. Jackson; poets River Huston, Tony Medina, Mose Xavier Hardin Jr., Catherine Zickgraf and Cathleen Bailey; and spoken word artists and performers Cliff C. Boyd, Mary Bowman, Lady Vee DaPoet, Storme Webber, Tim’m T. West, Sleepy Eyez Carter, Carl Hancock Rux and Red Summer.

Through this anthology, I hope to honor the Hemphill/Beam/unheralded writers’ legacy. In their memory and because of their bravery, Cornbread, Fish and Collard Greens joins a necessary and continuing conversation.

I was overwhelmed that so many believed in the necessity for a project like this and the contributors trusted me with their words. Completing this project has grown my faith in the God I serve and His belief in me as being worthy of His assignments.

Can you describe the significance of the anthology’s title?
In August of 1995, after living with HIV in total isolation for five or six years, when only my wife knew I was positive, I relocated my family from Washington, DC, to Newark, New Jersey. I was moving with the thought that I was taking my wife to her hometown where she would have support to raise our son and I could end my suffering by committing suicide.

In October of that year my mother, my MaDear, came to visit us in New Jersey. I had placed a great deal of emotional distance between MaDear and myself because I did not want to burden her. MaDear arrived on a Friday and was at my home when I returned from work. We had a great time talking and her hugging up on her first grandchild.

The next day MaDear asked if she could speak with me privately. We went into my son’s bedroom and her first question was, “Son, what is going on with you? You have been so distant from me and I feel there is a reason for it.” I sat on the bed beside her and began crying and I said, “MaDear, I am living with HIV.” She asked, “How long have you known?” I told her I was diagnosed in 1991 but that I am sure I was infected in 1989.

My MaDear wrapped her arms around her me and began to pray. She shared with me that when she goes to God in prayer she prays specific prayers and she needs to know what to prayer for when she is in prayer for her children. After we shared and prayed together, MaDear left the room and went into the kitchen. MaDear began to cook and when the meal was complete she asked my family to come to the table. MaDear served us cornbread from the cast iron pan she traveled with, fried chicken, collard greens, yams and white rice.

I often joke and tell folks, we, people living with HIV, need more than chicken soup. But my MaDear knew better. Her menu for healing the soul is soul food: cornbread, fish and collard greens.

The publication is dedicated to Richard Anderson, Joseph Beam, Essex C. Hemphill and Floyd Patterson. Can you discuss their influence on the project and your writing?
Joseph Beam and Essex Hemphill created literary works that set out to counteract the absence of positive images of gay men of color in the media and their exclusion from the cultural world of white gay rights activists. Cornbread, Fish and Collard Greens is meant to add to the continuum and the history of AIDS literature. Through Joseph Beam and Essex Hemphill, the model of an inclusion of many voices in an anthology left an indelible mark on my personal journey to self-acceptance. It is my hope the quilt of words compiled in Cornbread, Fish and Collard Greens will be used to wrap around a community of people who are too often working to combat the words which our society continues to speak to us and at us.

Richard Anderson and Floyd Patterson were both personal friends of mine. Warriors in the fight against HIV and stigma, they both stood in their own truth and spoke to free our community (those infected and affected) from mental and emotional shackles. Their activism and action on behalf of a cause, action that goes beyond what is conventional or routine, and their willingness to sacrifice themselves so we can find our voices has allowed me to find my own. In finding my voice, I have found freedom to stand in my truth and share it to empower others to do the same. With every victory there is great loss. Loss of relationships with both family, friends, and at time the loss of intimate partners. Like Beam, Essex, Anderson and Patterson, I believe the cause and the actions of sharing my personal journey is worthwhile. Like these men I will be a challenger to policies and practices, trying to achieve a social goal, not to obtain power itself.

What do you hope readers will take away from Cornbread, Fish and Collard Greens?
It is my hope and prayer that readers will be inspired to write and to begin filling their notebooks with short fiction, poetry, creative nonfiction, personal narratives, critical essays and visual art that features their voices and stories of thriving with HIV/AIDS. I hope the readers take away the importance in the idea that we must share our own stories because if we don’t, they may never be told or told incorrectly.

“I was going to die, sooner or later, whether or not I had even spoken myself. My silences had not protected me. Your silences will not protect you.... What are the words you do not yet have? What are the tyrannies you swallow day by day and attempt to make your own, until you will sicken and die of them, still in silence? We have been socialized to respect fear more than our own need for language. I have come to believe over and over again that what is most important to me must be spoken, made verbal and shared, even at the risk of having it bruised or misunderstood.” --Audre Lorde


Khafre K. Abif, MLS, is the founder and executive director of Cycle for Freedom, a national mobilizing campaign founded in 2010. Its mission is to reduce the spread of HIV among African Americans and Latinos by confronting three critical issues that fuel the HIV pandemic: HIV-related stigma, homophobia and lack of education. To fulfill that mission, Cycle for Freedom will work with African-American and Latino communities along the Underground Railroad Bicycle Route to develop strategies designed to increase HIV testing and reduce HIV-related stigma. During the 75-day campaign, Cycle for Freedom will work with 14 cities along the route.

Abif is the editor of the anthology Cornbread, Fish and Collard Greens: Prayers, Poems & Affirmations for People Living with HIV/AIDS, AuthorHouse 2013. He has begun a promising career in publishing with early professional efforts, which include co-editing with Teresa Y. Neely In Our Own Voices: The Changing Face of Librarianship (Scarecrow Press, 1996); “Afrikan-Centered Scholar: At Work in the Children’s Room” in the same volume; and “At Work in the Children’s Room: Building Literacy, Building Families” in Poor People and Library Services, edited by Karen Venturella (McFarland & Co., 1998). He has served as associate editor for Black Issues Book Reviews’ Children’s Bookshelf for three years. Forthcoming works include, Raising Kazembe, Sistah’s Speak, He Ain’t Heavy, It Is Our Turn to Speak, A Pastor’s Prayer for People Living with HIV/AIDS, TransVoice: Shout Out Loud, and Face US: Not Our Status But Our Story. You can follow Khafre’s blog on The Body.

Could HIV Meds Reduce Eye Disease in People on PrEP or HIV Treatment?