Give My Regards to Larry Kramer

Early this morning, my partner and I, along with Broadway fans everywhere, huddled with our coffee in front of our TV in great anticipation of the moment we look forward to each year-the announcement of the nominations for this year’s Tony Awards, which celebrate excellence on the Broadway stage.

But one man who will not have to wait until the June 9 ceremony to find out if he takes home a Tony is playwright and activist Larry Kramer. It has already been announced that he will be awarded the Isabelle Stevenson Award at this year’s ceremony. For nearly 40 years, Isabelle Stevenson served as first the president and then the chairwoman of The American Theatre Wing, the organization that sponsors the Tony Awards. Her namesake award recognizes an individual from the theater community who has made a substantial contribution of volunteered time and effort on behalf of one or more humanitarian, social service or charitable organizations.

Kramer is being recognized for his work as the cofounder of Gay Men’s Health Crisis, the world’s first HIV/AIDS service organization. He is also the founder of ACT UP, the international network of activists who fought for the development and release of most HIV treatments. Kramer is also the author of The Normal Heart, which in 2011 won a Tony Award for Best Revival of a Play. When it was originally produced off-Broadway by Joseph Papp at The Public Theater in 1985, the play starred Brad Davis (Midnight Express) who was diagnosed with AIDS that year and succumbed to the disease in 1991. The semiautobiographical play, set in the early days of the AIDS epidemic--that would be the early 1980s--focused on lead character Ned Weeks (based on Kramer himself) and his work to mobilize his friends to advocate for funds and attention to combat the new disease that was attacking the gay community and killing many he loved.

There have been subsequent major productions in London, Los Angeles and--in a revival at The Public Theater in 2004--previously in New York.

The Normal Heart finally made it to The Great White Way in 2011 with a production at the John Golden Theatre. It was directed by Joel Grey and George C. Wolfe, and the cast included Joe Mantello, Ellen Barkin, Jim Parsons, John Benjamin Hickey and Luke MacFarlane. It won Tonys for Best Revival, Best Featured Actor (John Benjamin Hickey) and Best Featured Actress (Ellen Barkin), and it was nominated for Best Actor (Joe Mantello) and Best Director (Joel Grey and George C. Wolfe).

After many years of rumors and setbacks, a film version of The Normal Heart is finally in the works. It’ll be for HBO, directed by Ryan Murphy (Glee, American Horror Story) and starring Mark Ruffalo, Julia Roberts, Matt Bomer, Taylor Kitsch, Jim Parsons, Jonathan Groff and Joe Mantello. Look for it in 2014. 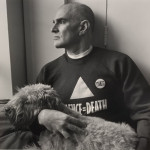 Check Out the AIDS Writers Among These LGBT Portraits [SLIDESHOW]