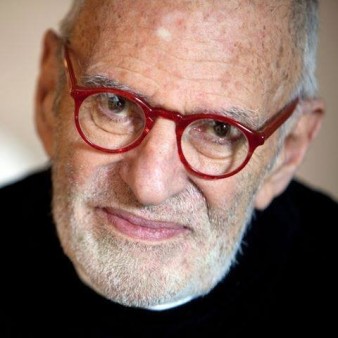 Larry Kramer Has a Few (Kind!) Words for a Billionaire Trump Supporter

In this open letter, the iconic AIDS activist shows us how to challenge friends and loved ones who back Trump.

To be honest, this election cycle is getting so intense that I hesitate to talk politics with certain friends and family members. That’s because I’m afraid to learn they are supporting Trump and perhaps holding some very questionable beliefs about, well, basic reality.

For the record, I don’t see the world in stark black and white—or, in this case, red and blue. But it’s upsetting when people you love and admire support a candidate whose views are homophobic, xenophobic and in many cases just plain cray-cray.

But how do you even begin a conversation with them, especially when they’re smart enough to know better? Well, Larry Kramer steps in to offer us an example of how it can be done.

This week he posted an open letter to Steven Roth, one of Trump’s billionaire backers, and, like everything the AIDS activist and ACT UP cofounder writes, it’s worth studying.

Shockingly, for a guy famous for his irate outrage, Kramer offers some kind words. I think that’s one of the takeaways. Also, it helps when you show common ground with the person you’re talking with—and when you try to understand what motivates him or her to support Trump—that way, you won’t alienate or attack a potential ally.

I thought we had become friends when your lovely wife Daryl had the courage to produce my AIDS play The Normal Heart on Broadway in 2010. I know you were proud of her and me and the production that won three Tonys. I remember the warmth and fondness of your many hugs and even kisses.

We stayed friends. You arranged for me to teach and lecture at Dartmouth, your beloved alma mater where you are on its board. I was able to tell you what a terrible job its president was doing and you had him replaced.

I know how proud you now are of your gay son Jordan, so much so that you bought him Jujamcyn Theaters to run so he could become one of the most important persons in the theater. Which he has, brilliantly.

I know how impressed I was with you at Jordan’s wedding to his husband Richie Jackson. They now are fathers to two wonderful boys, your grandsons. I was so proud to be at that wedding with my own husband David Webster.

And I know how proud you are of your extraordinary wife, Daryl, who has on her own become one of the theater’s most successful and tasteful producers.

I don’t know why but I was incredibly shocked and disappointed when it was announced that you had become one of Donald Trump’s billionaire brain trust.

I could not believe that you could support a candidate, a vice-president, and a party that threatens many of the things that you hold most dear. The platform of the Republican Party is the most homophobic one in recent memory. Its candidates spout nothing but hate for your extended family.

I listened to his economic speech from Detroit. The words that kept running through my head were “police state.” To bring into actuality the perverted changes Trump is trumpeting will require a totalitarian police state to bring into reality.

You are a very smart man. I cannot believe that you can possibly think Trump can run this country. Among many other ignoble acts, he has refused to meet with anyone gay or any of our organizations that attempt to protect us and fight for our country’s health. He has not said a single intelligent word about gay marriage, gay adoption, AIDS, the gross ineptitude of the National Institutes of Health, the unconscionable greed of the pharmaceutical companies that are prepared to only save people when they are rich. He also has racial issues (one of your own grandsons is of mixed heritage), issues with women that certainly must offend your wife, and a growing list of off-the-wall remarks that only engender hate.

You are one of the richest men in the world. You control more real estate in New York City than any other single person.

I ask you fervently: don’t you have enough? How much more does one need to acquire before you and your fellow billionaires are willing to share and help and fight with us and not against us?

You could be a leader in all of this.

As it is, your own extended family is severely threatened by Donald Trump. Their health, their legality, their safety, their friends, their coworkers in the theater.

I cannot accept that such an intelligent and gifted man as I know you to be can believe that Donald Trump is anything but strange and scary, an indigestible cauldron of rotten and poisoned ingredients.

I challenge you to leave his orbit. The very health and existence of your extended family is in peril.

I hope and pray that you will do this. And that we can hug again once more.

In remembrance of things past with fondness,

Larry Kramer’s latest work is his novel “The American People.”