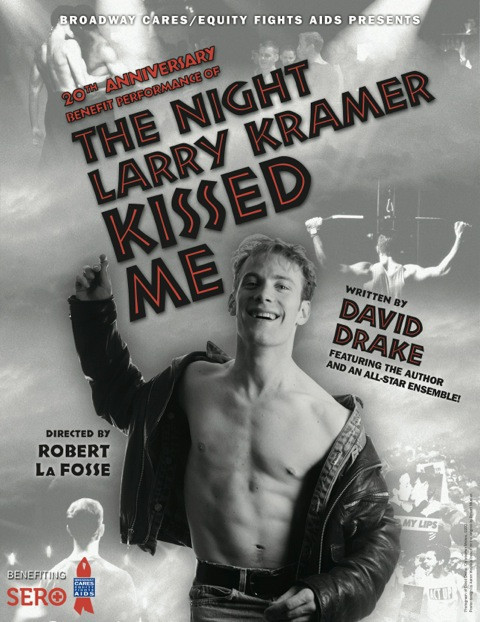 A little more than 20 years ago, Tom Viola and I produced David Drake’s landmark play, The Night Larry Kramer Kissed Me, at the Perry Street Theatre in Greenwich Village.

It became one of the longest running one-person shows in New York theatre history, with  more than 100 productions of it around the world to date.

I’m excited to announce that Broadway Cares is producing a special one-night 20th anniversary benefit performance of The Night Larry Kramer Kissed Me on May 20 at the fantastic 599-seat Gerald W. Lynch Theatre at 524 West 59th Street (John Jay College). Tickets just went on sale today and we’re expecting them to sell fast. 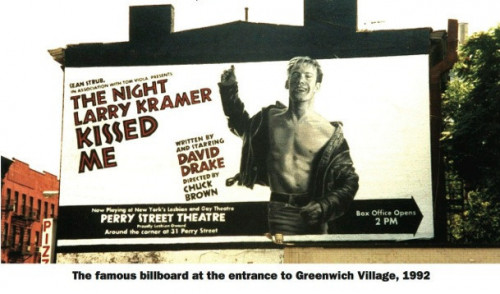 I knew I loved David’s work from the moment I first heard him perform one of his Tommy Bobby Sherman monologues in 1990 at an ACT UP benefit at the Pyramid Club, (hosted by Ryan Landry and produced by Dan Baker).  When David performed  vignettes in the car during a memorable road trip we took to Key West with the late Stephen Gendin and Mark Aurigemma, I knew I had to help bring his work to a bigger audience.

But what I didn’t realize initially was how perfectly the play reflected the activist zeitgeist of that early 90s moment. The Night Larry Kramer Kissed Me was at the crux of profound cultural change; the year the show first opened, 1992, was a landmark year in the battle for LGBT equality and preceded by only a few years the introduction of protease therapy that changed the course of the HIV epidemic in the United States.

In the intervening two decades, we have seen much progress. Yet HIV-related stigma has, sadly, increased. While fear of casual contagion has lessened, other components of stigma, like marginalization, prejudgment and the “othering” of people with HIV, has gotten significantly worse.

Today, people with HIV are increasingly defined through the prism of our potential to infect others, as inherently dangerous viral vectors who must be identified, tested, tagged, reported, regulated, controlled, criminalized and incarcerated. But the treatment for stigma isn’t found at a pharmacy, it is accomplished by empowering the stigmatized, educating the public and providing a path to justice for all.

That’s the message so eloquently conveyed in The Night Larry Kramer Kissed Me, why the play has become a classic and why I hope you can join us on May 20.  Bring a young activist as your guest to share with them the camaraderie, passion and hope that so powerfully drove us at that time.

David’s first performances of The Night Larry Kramer Kissed Me were as benefits for community organizations, and he’s continuing that tradition on May 20. "This performance benefits two organizations very close to my heart, Broadway Cares/Equity Fights AIDS and the Sero Project are, respectively, headed by Tom Viola and Sean Strub, my friends who believed in my story from the very start."  David, your story, is the story of so many of us and it is our belief in each other that has carried us to this day.  Thank you.

Join Broadway Cares/Equity Fights AIDS, the Sero Project, and an incredible cast and audience to make this May 20 benefit performance not just a magical evening, but another turning point where we usher in a new generation of activists to carry on the battle so many of us have waged our entire lives.

Tickets start at $40 and can be purchased online at broadwaycares.org or by calling 212.840.0770, ext 268. VIP tickets also are available and include a reception with the cast and other benefits.  And those of you who can afford VIP tickets, you know who you are and please know how much your support will be appreciated.

Sero Project is a national alliance of people with HIV working to realize the vision of the 1983 Denver Principles manifesto to empower people with HIV and combat HIV?related stigma, discrimination and criminalization. For more information, visit seroproject.com, like them on Facebook at facebook.com/TheSeroProject and follow on Twitter at twitter.com/theseroproject.