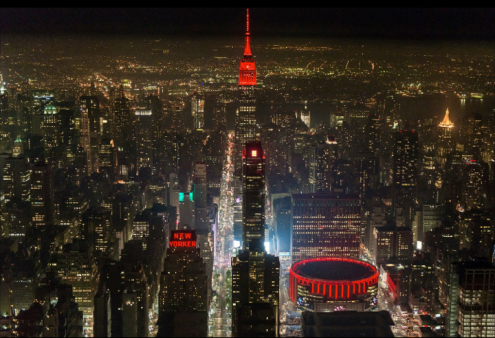 AIDS Walk New York 2016 is Sunday, May 15. Three years ago an annual tradition was born to raise HIV awareness in advance of the fundraiser for GMHC and 40 other local AIDS service organizations — Light Up New York.

On Thursday, May 12, dozens of buildings and other locations across the city were lit up in red. Among them were the Empire State Building, Madison Square Garden, the Helmsley Building and Macy’s.

Chita Rivera hosted the lighting ceremony at the Empire State Building along with GMHC CEO Kelsey Louie. "We are proud to see so many New York institutions joining us in support of all people living with HIV/AIDS," he said in a press release.

“With the help of our lighting partners, GMHC is continuing to raise HIV and AIDS awareness, end stigma and declare that AIDS is not over,” said Osvaldo Perdomo, GMHC board secretary and founder of Light Up New York.