Jason Segel who? Although the adorable actor may have successfully resurrected The Muppets last year on the silver screen, the stars of the Celebrity Apprentice have put puppets back on the small screens in our homes.

This week, Donald Trump tasked the contestants with performing in Stuffed and Unstrung, an off-Broadway puppet show for adults put on by the Henson Alternative Improvisational Group. In addition, the teams had to create two original puppets to join recycled fan favorites such as Aardvark and Armadillo from Jim Henson’s Animal Show and new additions Mr. Guy and Nerd Boy. 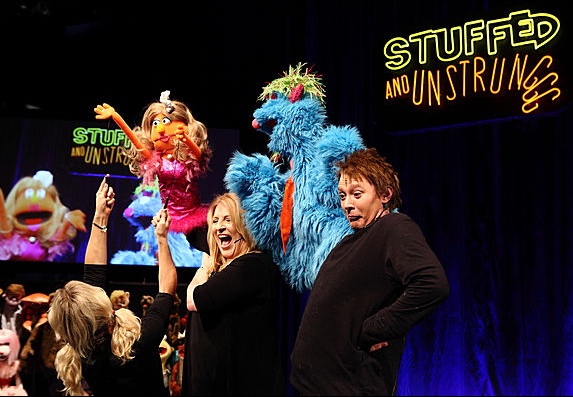 While it was fun to see Dayana Mendoza prove her sewing prowess (she even got herself a job offer from the muppet makers), and some of the celebs certainly got a few laughs from their admirable attempt at being funny on their feet, the most entertaining part of the show--for me, at least--was the behind-the-scenes drama.

Lisa Lampanelli, the project manager for Team Forte, is certainly living up to her title “The Queen of Mean.” For being such a funny lady, the comedian cannot put a smile on her face or keep her emotions in check. Also, her unexplainable vendetta against Mendoza is, in my opinion, completely unwarranted. Just because Miss Universe 2008 has a bangin’ body (duh) and just because English isn’t her first language, does not mean she isn’t capable of completing these crazy missions.

But, despite the tears and catfights, Lampanelli pulled her first win and secured $20,000 for Gay Men’s Health Crisis (GMHC)!

“This is so exciting I won for GMHC--they are getting 20Gs!” she said, adding: “I cannot believe I made them wait this long for a frickin’ win, but I can finally show my face around the gay community once again.”

As of episode 12, there are 11 celebrities down, and six more firings to go until Trump declares the winner of this Celebrity Apprentice cycle. And, the odds are in the HIV/AIDS community’s favor--with seven contestants left, all three celebs (Arsenio Hall for the Magic Johnson AIDS Foundation, Lampanelli for GMHC and Mendoza for the Latino Commission on AIDS) supporting HIV/AIDS causes are still in the running.