Living With Henry is a new musical about living with HIV. I figured I knew quite a lot about the topic, but this clever production managed to prompt an epiphany for me. 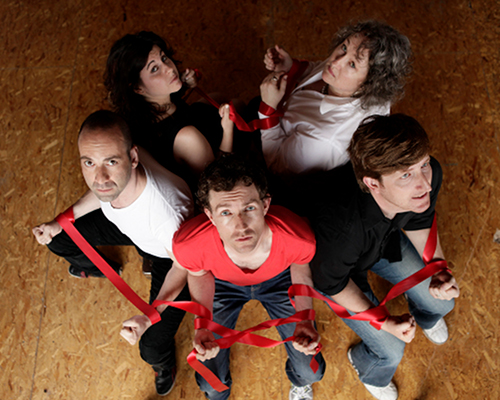 Photo by Pierre Gautreau
It also managed to entertain. Presented by the New York Musical Theatre Festival, an annual showcase of new musical theater works, the show was incredibly well written and well acted. Every performer was a pro with a pleasing voice. It was one of those shows (directed and choreographed by Donna Marie Baratta) where several actors play multiple parts and move a few set pieces around on a mostly bare stage...and that worked just fine. The musical numbers (music and lyrics by Christopher Wilson, who also wrote the book) were engaging and Broadway caliber. Frankly, they were better than those in many new Broadway musicals I’ve seen in the past few years. Wilson incorporates a range of musical styles, but the ones I enjoyed most were in the Closer Than Ever/Next to Normal style. (What’s more, the venue--the PTC performance space at 555 W. 42nd St.--was new and quite comfortable. It’s exciting that off-Broadway venues such as this are being built.)

Although I knew the show was about living with HIV, I didn’t know that Henry (played by sexy Dale Miller), dressed in a black tank top, actually personified HIV. It wasn’t clear when he was introduced even though his middle and last names began with “I” and “V.” It enhanced my experience not to know that little fact beforehand.

The lead character Michael (played by Ryan Kelly) seroconverts after some hot but unsafe sex with Matthew (played by John Edwards). From this point on, Henry is a constant presence in Michael’s life. The main drama of the play is the ever-changing dynamic between the two as Michael (and Henry) deal with all the requisite issues that come with an HIV-positive diagnosis, such as disclosing to friends and family, learning to deal with the medical establishment, negotiating new relationships, etc. The dynamic begins as adversarial, but eventually Michael and Henry come to an uneasy truce in which they learn to accommodate each other in order for Michael to survive.

Living With Henry prompted an epiphany for me personally. My first partner Nick was diagnosed in 1985, two years into our relationship. He passed away in 1990. This was a time when there were no treatments and very little hope, so the setting was somewhat different than the one in this musical. But the concept that HIV was an entity that has to be reckoned with, is one that would have been helpful to me during that awful time. Perhaps Nick did understand that; I don’t think I ever did.

This idea became crystal clear in one of the show’s last scenes, in which Peter, Michael’s new boyfriend, breaks up with him because he just can’t bear being in a three-way with Henry. Lightbulb! Had I understood that concept all those years ago, perhaps I could have dealt with the whole situation better and been more supportive of Nick toward the end.

Although there are no future production dates listed on the show’s website (http://www.livingwithhenry.com), I sincerely hope that more people get to experience this musical. It would be enlightening for those trying to learn to “live with Henry.”