A story that is getting national headlines right now involves a high school in St. Louis, where up to 50 students are being tested for HIV , after being exposed to the virus.

The details are fuzzy- someone tested positive and informed authorities that quite a few people were in danger of also being positive. The article skirts around how these people were exposed- it mentions all the risk factors, including sexual contact, unsafe piercing and tattoo’ing- but I’m guessing it was probably unsafe sex. 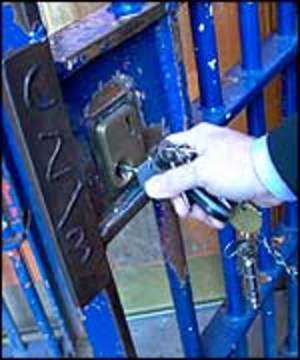 A recent story that isn’t getting headlines happened to a couple of my friends.

After hitting the grocery store, the couple decided to swing by CVS to pick up some condoms. Once they got to the aisle, they noticed that condoms were locked up. They went to the register, and asked for assistance. “I don’t have a key,” they were told. When another employee who was closer to the aisle was asked if she could unlock the glass door, said employee blushed, giggled nervously and exclaimed, “I don’t have a key!”

Then she ran away.

My friends stood in shocked silence. Still condomless. Finally, the employee returned, mentioned once again that she did not have a key, and disappeared never to be seen again. The third time was the lucky charm, and the door was unlocked.

Now, it’s a pet peeve of mine that condoms are locked up to begin with. And if it’s any wonder why condoms are stolen, then this story should clear up that mystery. Fortunately, my friends are in their late 20’s, and weren’t going to take no for an answer... but imagine if a high school student dealt with this kind of ignorance?

When I was in high school, a friend went into a drugstore to buy condoms before they were locked up. The person behind the register asked if he was old enough to buy condoms. My then 14-year old peer handled the situation a bit differently than my friends this week at CVS... “Fine, I’ll get the bitch pregnant!”, he shouted, before throwing the condoms at the drugstore employee.

In terms of the St. Louis story, it is mentioned that the students had HIV education. Did this involve proper use of condoms, or any advice outside of “don’t get it”? And beyond that, should we be warning students about the attitudes they will face when attempting to purchase condoms, which are locked up like hardened criminals?