I recently experienced two deaths within a week. It was the passing of my dogs, Hope and Parker. I had them since they were puppies and so I was able to create so many memories and experiences with them both. As I write this I fully understand that people may question what does losing a pet have to do with a HIV blog and there may be those who question about writing about the death of a dog. After all it was just a dog and you can always get another one some may say. Hopefully by the end of the blog there will be a greater understanding of how losing a pet has such an emotional impact and its connection to my HIV. 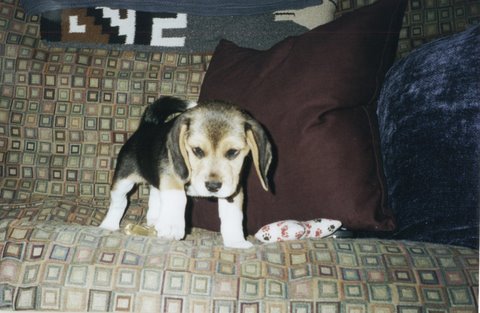 Hope came first, as a beagle puppy she was spunky and stubborn. In fact, it was telling when we were kicked out of puppy training class as it was either Hope’s way, or no way. Parker came the following year from the same breeder, having the same father but different mother. As a total opposite of Hope she was more timid and it took her awhile to find her bark. But when she did, she loved to howl.  Hope could care less about being held whereas Parker demanded the human touch.

I was already was living with HIV and having my pets made a difference. Before they came into my life I was more reckless and sometimes had little regard for my own health. I would miss taking my medication knowing the risk of developing resistance. Of course there were other factors which were promoting my bad health behaviors, but I didn’t care. After all it was me against the world.

Something happened when Hope and Parker came into my life. I was now responsible for the well-being of two living lives. It was no longer about me and my actions now affected others. But at the same time, I didn’t realize how much I needed them as well. They gave me a reason to go home as I knew on the other side of the door were two beings ready to show me love. I don’t think there has been a single day when I turned the key and open the door to grumpy faces. There was always love waiting on the other side. 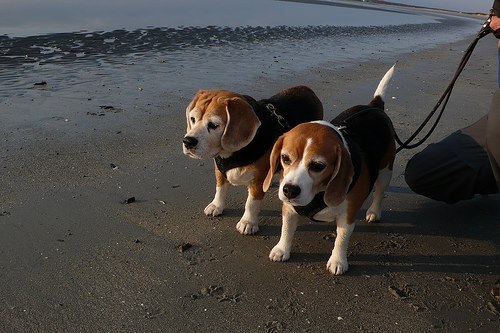 Sometimes when you live with HIV you forget how to love yourself as you feel the disease has made you different, unlovable and unwanted by others. It’s that unconditional love, whether it’s coming from another person or a pet, that makes you aware of your value. Even when you’re sad, pets are aware and want to bring signs of love back in your life. Hope was good at this. As someone who didn’t like to be held, she would know when I was down. During those moments she would jump on the couch next to me and lean her full body weight against me with her paws resting on my legs. She just wanted to be close and let me know she was there.

Parker was no slouch neither. She would always put her head against my chest as if to listen to my heart. The heart that had love for them and for life.  Pets can be underestimated on the difference they make in people’s lives. Sometimes those with HIV may not have the support of friends and family based on their status. They may have difficulty finding a life partner based on HIV stigma. So a pet may be that emotional string that keeps a person going during those dark times. A pet doesn’t care what your HIV status is. They just want to love you. And they give you a reason to love.

Pets fill that empty space and contribute to your well-being. The loss of a pet, compounded with living single with HIV feels you not only with grief, but questions of “what’s the point” as often people don’t fully embrace the importance your dog or cat, played in your life. Home is not the comforting place you yearn to be, but a reminder of loss. I know for me, after their deaths I did everything to not go home. Sometimes when I made it home I would just stand outside before going in. Preparing myself to walk inside to habits which were no longer there.

I suppose I knew they wouldn’t be with me forever and in preparation I started to capture their lives on video and pictures, uploading them to the cloud, where I could pull them open when I wanted to see their faces. There was one picture in particular where Hope wasn’t feeling good and looking back it captures the dimness in her eyes. I didn’t know at the time it was going to be the very last picture, despite taking her to the vet the next day.

They were now 15 and 14, the maximum age of a beagle. During the previous year we learned Hope had heart failure and Parker was diagnosed with cancer. Even when they were diagnosed, I had hope. It was the same hope I gave myself when I received my own HIV diagnoses. I just knew then that taking care of self along with complying with prescribed medications may not cure the ailment but can give you more time and hope.

This past January, on the 9th to be exact, Hope’s little heart stopped beating. She died at home in our arms. Less than a week later on that following Thursday, Parker had developed pneumonia in her lungs and couldn’t breathe. I was informed she would suffocate during the night. The choice was made to put her to sleep as my one rule when it came to their lives is that I never wanted to see them suffer for the sake of my own benefit. Of course I wanted one more day but not at their expense. Although it remains hard for me to deal with, in a poetic way they wanted to be together as they were in life. And I find peace in knowing I was there at each instance to say thank you and goodbye.

As I was grieving their loss I stopped taking my HIV medication on a regular basis. My eating habits were starting to worsen with junk food and alcohol. I distanced myself from friends and those who cared for me. I didn’t realize I was returning to those bad habits before they came into my life. The grief and depressing of the loss was overwhelming. They say it gets better but also you’ll never forget. To get past my grief I had to stop reflecting on their last moments and instead smile at the many memories we shared. Sorta like how I recovered learning about my HIV status where I had to stop focusing on the guilt of how I go it and instead look at the gift of life I have.

I have since returned to taking care of myself as I know it’s not only the right thing to do but I couldn’t simple throw away all those lessons Hope and Parker gave me in the last 15 years. If I truly wanted to honor their spirit, I had to reflect on the love they gave me.

Believe me there are still moments of grief as it’s still raw. It’s the learning of new habits as I didn’t realize how much my life revolved around them.  It’s me learning how to walk into a quiet home. It’s the oddity of going to the kitchen and not hearing small paws follow me or eating dinner and having to throw away the scraps instead of waiting beagles. It’s the sadness of knowing when I go to bed there’s not something curled behind my leg or having to no longer compete for blankets in the bed.

So thank you Hope and Parker for reminding me of the love that exists and for helping me be a better person. You were two bright lights during the darkest moments of my life and the greatest joy I can capture from your passing is that you’re both together. I didn’t lose Hope or Parker, instead I gain so much love. Good night girls. 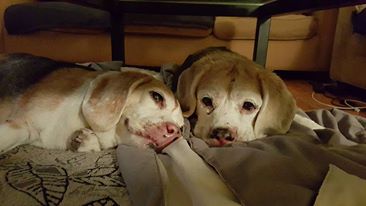