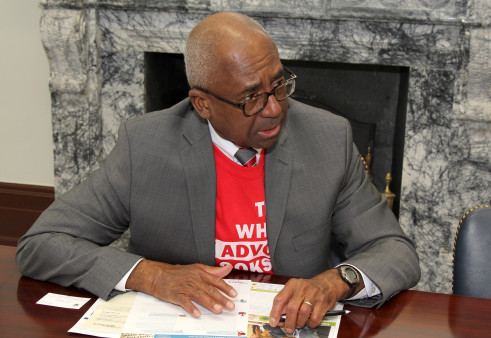 As We Mark 37 Years of HIV, We Can End the Epidemic. Will We?

I remember those first reports in June 1981 as well as the historic HIV moments that followed, including the one right now.

With one now very big exception, nothing really notable happened on June 5, 1981. The then little-noticed exception was found in the publication of the CDC’s Morbidity and Mortality Weekly Report which noted that a rare form of pneumonia had been diagnosed among five “active homosexuals” in Los Angeles. The report said that the men were treated at 3 different hospitals and that two of the men had died. Three of the men had been previously healthy according to the report.

There was little immediate reaction in the public to the MMWR report here in the United States or around the world. The Associated Press and the Los Angeles Times filed stories about the report on June 5, and the San Francisco Chronicle ran an article on June 6. This may seem strange today, when “Breaking News” is a daily feature of our lives and social media can make even the smallest news item known worldwide instantly. The New York Times, the “paper of record,” did not do an article following up on the report until a month later, in its July 3 issue. The Times article reported on what by then were 41 cases of a rare form of cancer among homosexual men in New York and California. Reading the article that day on the eve of the July 4th holiday as a gay man living in New York City, I thought it was a strange story, but had no idea that my world, and indeed the whole world, was about to change drastically. I certainly had no idea that I was witnessing the beginning of what would become one of the worst pandemics in history.

The immediate reaction to the June 5 report was slow, but the pace of varied responses and reactions built up quickly. By mid-August Larry Kramer pulled together a group of gay men that raised immediate funds and led to the formation of Gay Men’s Health Crisis (GMHC) in January 1982, the nation’s first community-based AIDS service provider. Along with that activist response, there was fast-growing fear among many gay men, increased stigmatization of gay men and of gay sex (including internalized stigma) and stigmatization of injection drug users and of drug use in general, increased discrimination, and blindness to the impact of the emerging epidemic on women who did not have a history of drug use, gay and bisexual men of color, and other men who have sex with men.

There was also much hope and optimism in those early years that a cure for AIDS would be found quickly. However, the more dominant reaction among the general public and most levels of government was the willful and shameful ignorance of the emerging AIDS epidemic and neglect of, animosity toward, and abhorrence of people living with and dying of the newly recognized disease. The stigma, discrimination, and neglect all but extinguished the hope of a cure inspired by the active and activist response to AIDS. When I was 41 years old and diagnosed with HIV infection in 1989, I was convinced that I would be dead before my 50th birthday.

Hope and optimism in the fight against AIDS and HIV infection was rebounding by the 15th anniversary of the AIDS and HIV pandemic on June 5, 1996. The growing proof of the effectiveness of highly active antiretroviral therapy (HAART) in saving lives of people living with AIDS heralded a new era of HIV treatment. The theme of that year’s International AIDS Conference, “One World, One Hope,” articulated the resurgent optimism.

The revival of hope and optimism was soon challenged by the clear inequities and gaps in access to the new, effective drug therapies and gaps in access to HIV prevention education and services. The themes of the 1998 and 2000 international conferences were “Bridging the Gaps” and “Breaking the Silence.” The June 5 anniversaries of the HIV pandemic were grim reminders of the toll that HIV disease had taken on our lives and on our communities. The light at the end of the tunnel provided by effective treatments was eclipsed by continued stigma, discrimination, and the blatant lack of sufficient political will to conquer HIV infection and disease within governments here in the United States and around the world. Progress and the ensuing hope and optimism were being kept alive by the magnificent courage and determination of people living with and affected by HIV, health care and service providers, HIV-focused researchers, and HIV advocates.

June 5, 2018, the 37th anniversary of the HIV pandemic is now here. We are still counting the years of HIV disease. We have at least two generations of people who have never known a world without AIDS. But we do have the proven and effective treatment and prevention tools to end the HIV epidemic here in the U.S. and globally. We have powerful messages such as “Treatment is Prevention” and “U=U” (meaning, an undetectable viral load is untransmittable). I recently celebrated my 70th birthday, and I’m more worried about my back than I am about being HIV positive. And I am certainly not the only long-term survivor; there are many thousands of us.

But many multiple thousands of people who still remain vulnerable to HIV or whose HIV is undiagnosed or not successfully treated. Yes, there are numerous factors that account for those realities. For me, the salient factor is the continued lack of sufficient political will to end the HIV epidemic. We have a president and an administration that have made little public effort to highlight the priority of ending the HIV epidemic. We have an administration and a congressional majority that work to undermine health care and the various safety nets and entitlement programs that are crucial to Americans, including those of us living with HIV. Thankfully, tenacious federal leaders and workers are moving forward to maintain a strong federal response to HIV. Thankfully, the courage and determination of people living with and affected by HIV, providers, and advocates that have kept hope and optimism alive in the past continue their efforts. But the challenges and barriers posed by the lack of sufficient political will are daunting.

We enter the 38th year of AIDS and HIV still counting. We can end the epidemic, but will we? If the political landscape does not support our efforts, then we must work together to change it; to elect leaders that have the political will to move us forward and not backward. The June 5, 2019, anniversary can be a marker on the countdown to ending the HIV epidemic. Yes, we can. More importantly, we must.