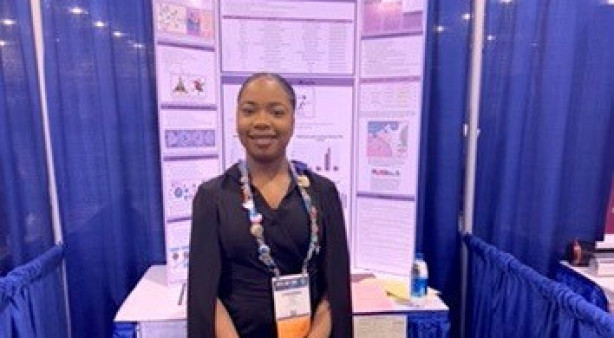 Meet the Teen Researcher Working to Create an HIV Vaccine

“Young researchers such as myself…can provide a new perspective and contribute to the conversation for a cure,” says Chidera Ejikeme.

Chidera Ejikeme, from Dix Hills, New York, competed in the International Science and Engineering Fair (ISEF) 2019 — the world’s largest international pre-college science competition — with her project titled “Amino Acid Residue-Specific Interaction between gC1qR and Cytotoxic Peptides of Various Pathogenic Microorganisms with Homology to HIV-1 gp41 3S.” A program of Society for Science & the Public, ISEF unites the top, young scientific minds and showcases their talents. We caught up with Chidera to learn more about her project, what it’s like to be a young HIV researcher today, and her future goals.

Can you explain what you’re researching? How did you get interested in your research topic?

I conducted my research as a member of the Simons Summer Research Program at Stony Brook University. Through the program, I found my amazing mentor, Dr. Berhane Ghebrehiwet. My research focuses on ways to target the HIV virus through the classical complement immune system. In broader terms, the immune system is our body’s natural defense against disease. It is further classified into two parts: the innate, which consists of nonspecific barriers such as our acidic skin and stomach acid, and the acquired, which includes antibodies and white blood cells, contributing to the effectiveness of vaccines. The classical complement system integrates the innate and acquired systems, facilitating the immune response.

HIV can be seen as an elusive bandit; HIV relies on mimicry or existing immune receptors. There is a complement protein that recognizes and prevents HIV progression in humans. Knowing this, we found similar proteins made with similar pieces and tested to see if they could be recognized by the protein. Ultimately, the purpose of my research is to draw parallels between different diseases and their pathology, to create a multipurpose vaccine that neutralizes HIV in addition to the diseases caused by the selected proteins.

What is it like being a young researcher in the field of HIV?

I would say it’s very different. Even though scientists have learned a lot about the disease, there is still a wealth of information about HIV that we do not know. So as a young researcher, it is still amazing to learn new things about HIV, and trying to keep up with such a clever virus. Additionally, I feel that young researchers such as myself exhibit a duality: we can learn from our mentors—which I enjoyed doing—but we can also provide a new perspective [and] contribute to the conversation for a cure.

How do you hope that your research can improve the lives of people living with HIV?

Even though this possibility is very far into the future, I hope that my research leads to the creation of a cure to HIV. While being diagnosed with HIV and living with HIV can be difficult, thankfully it does not necessarily mean the end. Thanks to the tireless efforts of science, there are options for people living with HIV to live full, healthy lives. Of course, there is a disparity with who has access to treatment and prevention, and LGBTQ people, communities of color, and people in the U.S. South are disproportionately affected by HIV. I hope my research will be propagated throughout the world so HIV can be a thing of the past.

We’re in an exciting time, where the end of the epidemic is in our grasp. How does your research fit into the solution?

My research falls into the search for a more pragmatic treatment option. Of course, HIV treatment can help people live long, health lives with HIV, but the hope is for a cure. The Berlin experiment was an amazing feat in the realm of stem cell research, but it is not feasible to replicate on a broader scale. [Editor’s note: to read more about  the “Berlin Patient” who was cured of HIV, click here.]

Other therapies aid in delaying the progression from HIV to AIDS, but the viral load is still able to accumulate in reservoirs and increase a person’s risk for certain cancers. Vaccines seem like an obvious solution to a virus, but the HIV virus mutates six times within one flu season, so that renders it implausible. My research helps to edify general knowledge about HIV, and possibly create another angle to create a successful antibody that targets HIV.

What’s next for you?

This fall, I will begin college at Harvard University; I will concentrate in both Biomedical Engineering and Cellular/Molecular Biology, while being on the pre-med track. I intend to continue research throughout my four years. I will be driven by my curiosity and passion for science to change the world for the better.