Twitter
Facebook
Pinterest
Tumblr
Email
Advertisement
No, this isn’t a blog entry about longing for the days of President George Bush after last night’s State of the Union Address by President Obama. You’d know I have dementia if that were the case. This entry is only partially political, though mostly personal.

This weekend is the Miss America pageant in Las Vegas. Last year, Gwenn and I cheered on Miss Virginia and Miss New York, who is a Virginia native and a member of our AIDS Walk team, Supersnack. The current Miss Virginia is Caressa Cameron, who joined us in DC last October for the AIDS Walk and has been raising awareness about HIV/AIDS issues for several years now, becoming personally linked to the issue at the age of 8, when her uncle died from AIDS.

She is a friend to the positoid community. And Gwenn and I should be there cheering her on.  But... a funny thing happened on the way to Las Vegas this year.  The Miss America Organization invited Rush Limbaugh to be a judge. Yes, the man who infamously uttered the following statement in regard to women:

Admittedly, I just don’t like the guy.  Truth be written, I think he’s a blabbering idiot and I resent my much-beloved Miss America Organization for giving me yet another thing to have in common with Rush Limbaugh.  Aside from being white, now we are both officially assigned judges within the Miss America system.  Well, I guess we have three things in common, as we both ended 2009 with health scares. If his heart problem had been “the big one”, I may be in Vegas right now.

No, I’m not wishing he were dead.  But I don’t understand why he gets to judge Miss America... when I’ve judged several local pageants here in Virginia.  That spot on the panel in Vegas was mine.  I earned it. But I digress, this isn’t about me: it’s about the girls.

Why do smart, confidant women trying to earn scholarship money for college (and win, this is a competition) have to go through Rush?  I don’t understand the reason for having him there, outside of the shock value, getting his vast radio audience to tune in and hoping he provides a counter to the Miss USA Perez Hilton/Prejean moment. Okay, so I totally understand why he’s there. 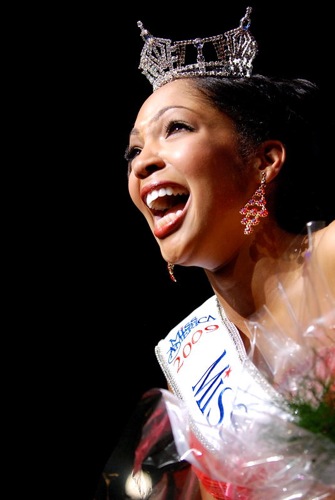 I have a lot of friends in Vegas this weekend and I wish Caressa well.  She’s already won preliminary talent, and I fully expect her to keep going strong.  She’s tough enough to handle Limbaugh and the crazy schedule that would await her should she bring home the biggest of crowns.  But I just couldn’t stomach the thought of sharing oxygen space with Rush Limbaugh- an ill representation of the male species, the classic example of being all balls and no heart.

My boycott, of course, has it’s limitations.  I will be watching the pageant on television.  And if you are a positoid, too, be sure to cheer for Miss Virginia.  Whether she comes home with the upgraded crown or not, she has had our backs.  This Saturday, even if it’s from a distance, we should have hers, too.

Check out my Poz column from November 2008, in which I expound on my love for pageants and hatred of anti-gay bigotry.