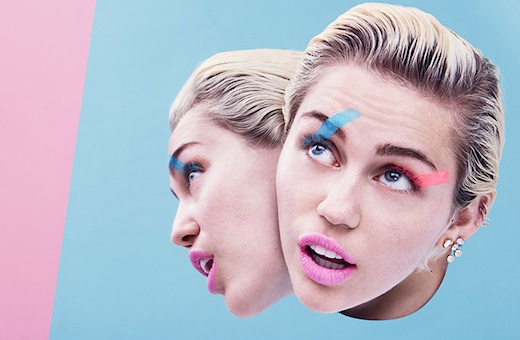 One of the few Paper magazine images that is rated G, as in ’groovy.’


I’ve never seen an episode of Hannah Montana. I found the 2010 song “Party in the USA” to be a fun but manufactured piece of pop fluff, much like its singer. I do not twerk.

And yet, here I am today, a total Smiler. For the unenlightened, “Smilers” refer to fans of Miley Cyrus. What can I say, the gurl done won me over. I even remember when and where I converted: at the 2013 HIV/AIDS Community Summit in Atlanta. Her Bangerz album had just dropped, and I was streaming it in my hotel room, mostly out of curiosity. (Miley had just cut her hair short and bleached it, which reminded me of Madonna in her True Blue phase, which I was obsessed with back in the ’80s, so naturally I had to check out Bangerz.) Been a Smiler ever since.

Which brings us to summer 2015 and her nude pix in Paper magazine.For me, Miley’s stardom (like the Paper photo shoot) is no so much about exhibitionism or nekkidness or sinfulness or whatever the naysayers call it; it’s all about talent and attitude and compassion. In other words, it’s about her heart, not her va-jay-jay.

In the article, Miley talks about her Happy Hippie Foundation to help homeless LGBT kids, a cause she seems genuinely devoted to:

Happy Hippie is designed as a corrective to what Cyrus understands as immoral politicking, the sort that pits outliers as pariahs and favors an archaic status quo. The foundation treats at-risk kids with art and animal therapies, two proven balms that have been instrumental in Cyrus’ own self-care. Although she was raised Christian, Cyrus maintains a particular contempt for fundamentalist lawmakers who rally against this sort of progressive, potentially life-saving change. “Those people [shouldn’t] get to make our laws,” she says. Those people -- the ones who believe that, say, Noah’s Ark was a real seafaring vessel. “That’s fucking insane,” she says. “We’ve outgrown that fairy tale, like we’ve outgrown fucking Santa and the tooth fairy.”

Eventually, she says, the problem of homelessness became impossible for her to ignore. “I can’t drive by in my fucking Porsche and not fucking do something,” she says. “I see it all day: people in their Bentleys and their Rolls and their Ubers, driving past these vets who have fought for our country, or these young women who have been raped.” She pauses. “I was doing a show two nights ago, and I was wearing butterfly nipple pasties and butterfly wings. I’m standing there with my tits out, dressed like a butterfly. How the fuck is that fair? How am I so lucky?”

I’m not aware of Happy Hippie directly addressing HIV/AIDS. But as POZ readers know, HIV is more prevalent in the LGBT community, particularly among the youth who’ve been kicked out of their homes and rejected by their families. (For more about this topic, read Kristopher Sharp’s POZ opinion piece "Falling Through the Cracks: My Struggle to Survive as a Homeless Youth." It’ll break your heart and inspire you to new heights.)

By bringing attention to homelessness and LGBT equality, Miley is fighting HIV. She has been involved in the fight in more direct ways, too. Like her stint as a Viva Glam girl for the MAC AIDS Fund--oh, and she’s being honored at a June 16 gala fundraiser for amfAR, the Foundation for AIDS Research. Clearly, this is one 22 year old who is aware of HIV. But I’d really like her to toss in some more HIV references and stats when she’s doing mainstream press and promoting her foundation.

I believe her openness about sexual fluidity and sexual health also fights the epidemic, and does so on a massive scale. “I don’t relate to being boy or girl,” she tells Paper, “and I don’t have to have my partner relate to boy or girl.” She continues: “I am literally open to every single thing that is consenting and doesn’t involve an animal and everyone is of age. Everything that’s legal, I’m down with. Yo, I’m down with any adult--anyone over the age of 18 who is down to love me.”

How can you not be down with that?

How can you not be a Smiler too?