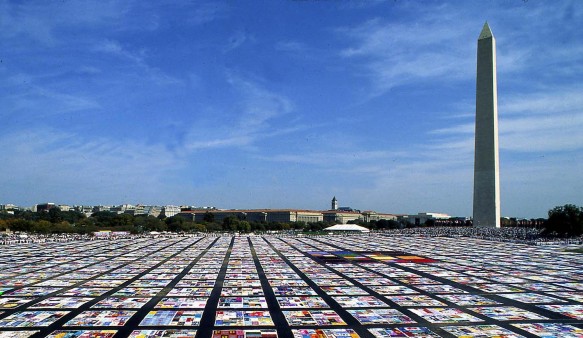 Why do we keep ignoring plain facts in favor of convenient falsehoods? NIH: http://aidshistory.nih.gov/tip_of_the_iceberg/quilt.html

It struck me today that, after being asked by a number of editors to write something about the presidential election this year, I had finally found my angle on the whole thing. Like many Americans, I feel the current political conversation has strayed too far from the facts that have actual, practical effects on the circumstances of voters.

It took a recent news item that has begun to pick up steam in the past day or so for me to realize that the national discussion has, throughout all of the 3.5 decades that I personally have spent in this country, been riddled with falsehoods and generalizations.

In other words, I don’t think the level of divisiveness has risen over the past few years. I think it’s simply become harder to casually obfuscate real facts, as journalists and citizens discuss matters that affect all Americans. Not to mention people of different nationalities, whose humanity we tend to forget about during election season.

A few days ago NPR broke a fascinating story about a group of researchers in the United States and the U.K. who have been using genetics to investigate the spread of HIV at the outset of the epidemic. According to their study, published in Nature, they sequenced eight blood serum samples archived between 1978 and 1979 in San Fransisco. According to further coverage by the Washington Post:

“Researchers separately sequenced the virus found in Patient Zero and found that his HIV-1 genome appeared “typical” of U.S. strains of the time and that there was extensive genetic diversity around the time he appears to have been infected, indicating that the virus had probably been in the country and evolving several years earlier.”

If you haven’t heard of Patient Zero, go ahead and Google it. (Notice I didn’t say him, for reasons that should become apparent.)

His name was Gaetan Dugas.

He’s been villianized as the dionysian flight attendant who “brought AIDS to America,” most notably in the bestseller “And the Band Played On,” a long-form journalistic account of the early spread of AIDS in North America written by Randy Shilts in 1987-- a well-researched account of the worldwide efforts of the medical and scientific communities in the western world’s attempts to identify, quantify and contain the HIV virus when things went critical in the early eighties.

The media had a field day with this story at the time. Shilts’ book would go on to be further popularized when it was filmed as a movie for TV by HBO in 1993.

But now, science is telling us something that many of us already new-- Gaetan Dugas was not, in fact, “Patient Zero.” Further, the term itself arose from a mis-reading of a handwritten note.

In a supplemental piece following the study published in Nature, researchers noted that Dugas “...was evidently just one of many thousands infected prior to the recognition of HIV/AIDS…” Which is to say that while Dugas may indeed have infected a number of sexual partners with HIV, he was one of likely hundreds of Americans-- gay, straight, whatever-- who were unknowingly doing the same thing at that time.

He was as innocent as anyone stricken with the then-incurable HIV virus, and he died of AIDS in 1987.

So why did we continue to villainize this man in our popular culture? America needed a scapegoat. American still does, apparently. America loves a scapegoat, and whether it’s immigrant families, the Black Lives Matter movement, LGBTQ rights, or socioeconomic inequality, we’ve got a media industrial complex who is always ready to cover a story-- so long as the ad dollars are rolling in. In our capitalist culture, divisiveness sells.

Even though the “Patient Zero” situation had already been debunked by the University of Arizona almost ten years ago, only now do we see headlines proclaiming it as news.

So after thirty-odd years of shaming, stigma-reinforcing “journalism” about Gaetan Dugas has basically amounted to stomping on the grave of a man who, according to the NPR report from yesterday, had “...volunteered at a nonprofit to help other people with HIV,” and further did actively assist the CDC by flying “out to Atlanta to donate blood samples,” according to Mr. William Darrow, who was the protagonist of Shilts’ bestseller, and an active researcher in the fight against HIV/AIDS.

I wonder if Darrow read Shilts’ work and ever objected to him referring to Dugas as “the Quebecois version of Typhoid Mary.”

I wonder if Shilts, who passed away due to complications from AIDS in 1994, ever stopped to consider what he was doing by turning Dugan into a scapegoat on the national stage. I’m reminded of Tony Kushner’s “Angels in America,” where a similarly hypocritical Roy Cohn is undone by AIDS as well-- life does, as it turns out, imitate art. And vice versa.

*Note-- My next video essay is about Kushner’s opus-- watch for it here in the coming weeks.

And if, like myself, you are exhausted from the irrelevant mud-slinging that our current presidential election has been reduced to, perhaps you can take some comfort in the knowledge that however overt, this kind of bulls**t has been dominating the national conversation for decades.