Peers will play a crucial role in ending the state’s epidemic by 2020.

Held at New York’s LGBT Center in Greenwich Village, the ceremony honored a diverse group of individuals receiving their peer worker certification from the New York State Department of Health AIDS Institute in one or more fields: HIV counseling, HCV counseling and harm reduction counseling and outreach. Five peers were certified in all three.

“As the saying goes, we’ve come a long way, baby,” said master of ceremonies Robert Curry. “From the Quilt to the classroom; from ACT UP to Atripla; from emergency rooms to ESAP; from AZT to ART; from positives and negatives to undetectable and viral load suppression; from vaccines for hep A and B to a cure for hep C; from stigma to drug user health; from trauma to transcendence; and from silence to peer certification. Hope is never silent.”

The program, which currently has 380 enrollees, is a joint effort by the state, the Department of Health, the AIDS Institute and Stony Brook University and was developed as part of Governor Andrew Cuomo’s plan to end the AIDS epidemic in New York by 2020. It’s believed that peer workers can play a significant role in helping to achieve this goal. Their lived experiences, as people living with HIV/AIDS or HCV or who have had to access harm reduction services, could play a crucial role in increasing linkage and retention to care, preventing new infections and improving HCV cure rates and HIV viral suppression among clients. As Curry said, “You’re a part of the picture. You’re a part of the solution.” 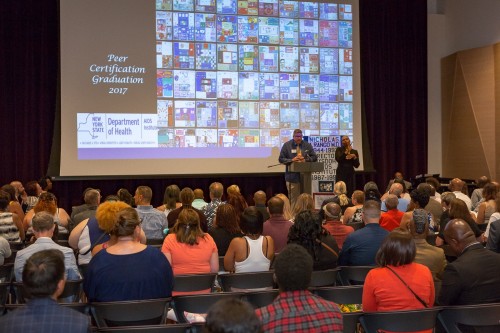 AIDS activist Michelle Lopez, who was featured on the August 1996 cover of POZ, delivered the invocation and was followed by Marjorie Hill, PhD, of the New York State AIDS Advisory Council, who made some remarks as well. “Credentials don’t make you, but they open the door to allow people that don’t know you to take notice,” said Hill.

When the director of the AIDS Institute, Johanne Morne, MS, took the stage, her eyes filled with tears as she recalled the process of getting to this day. She said it was an honor to be a part of such a special occasion. “You don’t remember days,” she said. “You remember moments, and this is a moment. Give yourself the credit for what it took for you to get here.”

Although Demetre C. Daskalakis, MD, assistant commissioner of the New York City Department of Health and Mental Hygiene, lightened up the mood with some witty banter, he adopted a more serious tone when he explained how important it is to be a peer worker today. “You’re trailblazers,” he said. “The world is watching. You’re a professor in life. You’re a doctor of living. You have a masters in understanding community and what this is all about.”

Then, it was Ilvan Arroyo’s turn to address the graduates. The associate director at the Center for Public Health Education at Stony Brook explained how this program has given him and many others involved a new sense of purpose. “You’re the first 45,” he said. “You will always be the first 45. I want you to be an inspiration for the rest of the folks still in the program.”

Before the peers were presented with their graduation sashes, four of them gave addresses, including the state’s first certified peer worker and youngest peer graduate. Also among them was Nancy Duncan, who graced the March 2016 cover of POZ. Duncan shared the journey that led her to this day and left her fellow peers with some familiar lasting words. “Like they say, AIDS is not over for anybody until it’s over for everybody.”

The ceremony closed out with final remarks by Dan Tietz of the AIDS Institute, Rusty Chambliss of the PWA Leadership Training Institute and Stacey S. Latimer, the founder of the Love Alive International Sanctuary of Praise—Worship Center who has been HIV positive for 30 years.

“It’s a vision of hope to see each of you graduating knowing that there is an experience of living and walking that’s passed on to other people,” he said. 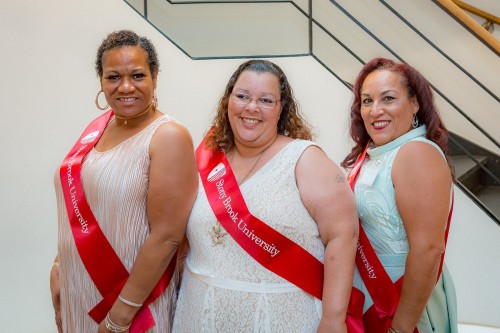 Peer graduate Traci Shelton, who was diagnosed with HIV in 2000, decided to participate in the program because she wanted to give back. Shelton currently works with Options for Community Living Inc., an HIV/AIDS services provider. “That was the first place I walked into when I found out my diagnosis,” she said. “I’m able to do what somebody freely gave to me. I’m able to give it back.”

Michael Pellew, a professor and a peer graduate, addressed stigma. “Being Black and living in a Black community, stigma was the name of the game,” he explained. “It’s not a racial issue. It’s a world issue. I look at everybody as one. I’m helping everybody that I come in contact with.”

“It was always exciting,” said graduate Dawn Kittell-Carney, who’s been living with the virus for almost 25 years. “[There] was always new information to learn. Besides the information, the peers got to be able to mingle with each other. When we got into the training room, it was just so powerful. We learned a lot from each other.”

Although Victwan A. McCorkle has been a peer worker for 15 years, he wanted to receive his certification because it validates his work for himself and further serves others. “One of the most important things for me is to be able to sit in a room with doctors, nurses and therapists and not feel like what I say doesn’t carry the same weight as what they say.”

Sometimes, all a person needs is an ear and some guidance to conquer his or her own personal battle. The journey may be long, but in the end, it’s worthwhile. And now, there are 45 newly certified peer workers across New York—with more on the way—to aid those in need.

For those interested in becoming a certified peer worker, visit www.hivtrainingny.org.