The New York Times dedicated the front page of the May 24, 2020, edition to commemorating nearly 100,000 COVID-19 deaths in the United States. 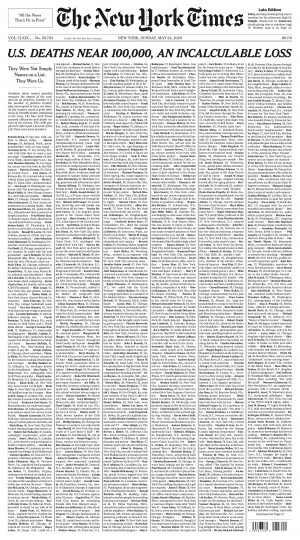 The headline read “U.S. Deaths Near 100,000, an Incalculable Loss” and the rest of the entire front page listed names and locations of people and some info about them.

The online version is an interactive experience that depicts people lost through the past few months. As the visitor scrolls down, the dates increase along with the death toll.

As the intro to the online version version puts it: “America is fast approaching a grim milestone in the coronavirus outbreak — each figure here represents one of the nearly 100,000 lives lost so far. But a count reveals only so much. Memories, gathered from obituaries across the country, help us to reckon with what was lost.”

The COVID-19 tribute was quickly countered by AIDS activists reminding us that The New York Times did not behave similarly for AIDS-related deaths.

Peter Staley posted the following critique on Facebook: “On January 25, 1991, this is how The New York Times reported that 100,000 Americans had died from AIDS. They didn’t bother writing their own story. They ran an Associated Press story instead. On page 18. Below the fold. No pictures. No names.”

The post has so far generated over 50 comments and over 2,000 shares. In digging a bit further, Staley found the original report from the Centers for Disease Control and Prevention that the AP article was based on.

He posted, “59% of the deaths were among gay/bisexual men, 21% were among IV drug users,” and quotes from the report:

“Although most deaths occurred among whites, death rates have been highest for blacks and Hispanics. During 1990, the number of reported deaths (national AIDS surveillance) per 100,000 population was 29.3 for blacks (non-Hispanic), 22.2 for Hispanics, 8.7 for whites (non-Hispanic), 2.8 for Asian/Pacific Islanders, and 2.8 for American Indians/Alaskan Natives.”

A stark reminder of how the comparisons between COVID-19 and HIV are not always direct.