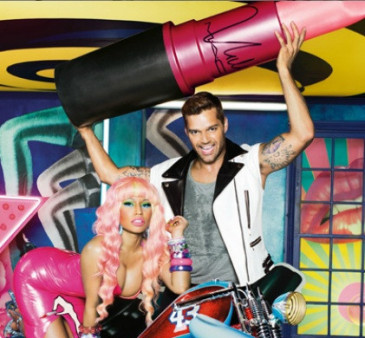 
I’m a big Nicki Minaj fan, but I’ll admit that I was late to the party. It took Taylor Swift rapping her own rendition of the hip-hop star’s single “Super Bass” on the radio in her cutesy country twang and the precocious 8-year-old Sophia Grace belting out “boom ba doom ba doom ba doom boom baby” with her adorably awkward cousin Rosie for me to finally catch on to the crazy haired cultural phenomenon. 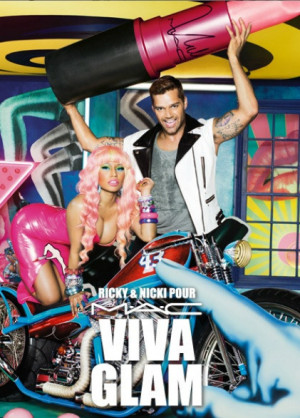 Ricky Martin’s smash hits, on the other hand, run on repeat in the soundtrack of my pre-teen life. In 1999 I was “Livin’ la Vida Loca” on the middle school playground and “Shaking My Bon-Bon” at bar mitzvahs.

These two musical superstars, Nicki and Ricky, are now not only sharing a spot on my ultimate party playlist but also combining forces as the new spokespeople of the MAC Viva Glam Collection.

Minaj (she is also known by her alter-egos Cookie, Harajuku Barbie, Roman Zolanski, Martha Zolanski and Nicki Teresa) represents the Caribbean (she was born in Trinidad) and African-American women. Both cultures are greatly affected by HIV/AIDS. According to the U.S. Centers for Disease Control and Prevention (CDC), an estimated 100,013 black adults and adolescents of Caribbean origin were diagnosed HIV positive from 2001 to 2007 and HIV/AIDS is the No. 1 killer of African-American women ages 25 to 34. Minaj has a big job ahead of her!

Just as the sexy songstress identifies with multiple demographics, Martin categorizes with many different groups as well. Along with being a hunky Latino and a native Puerto Rican, he is a gay man and the father of adopted twin sons. In the United States, there are more than 205,000 Latinos living with HIV, and men who have sex with men (MSM) have an HIV diagnosis rate more than 44 times that of other men--and more than 40 times that of women.

Martin may need a thesaurus to look up synonyms for “beautiful” and Minaj has some stiff competition following in Lady Gaga’s McQueen-clad footsteps (who can forget Mama Monster dressed in latex garb symbolizing a condom), the twosome do exemplify what is at the heart of the MAC Viva Glam campaign: assisting men, women and children affected by HIV/AIDS worldwide.