Of Pageants and Plasma

Last Saturday Gwenn and I went to the Miss Apple Blossom Pageant in Winchester for the crowning of a new queen.

This particular pageant holds special meaning for us, as it marks the first time we kissed, which was nine years ago. I was having a couple of friends over, and Gwenn had plans to go to the Miss Apple Blossom pageant... well, she changed her plans, and my mojo must have been working that night and the rest is history! 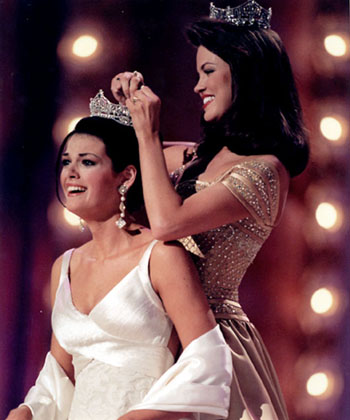 Miss America 1998, Kate Shindle, is crowned. Positoids around the world bow at her feet.

This year also marks the 10-year anniversary of the crowning of Kate Shindle as Miss America. She advocated for people with HIV and AIDS, and even championed needle exchange programs, which she initially opposed until she researched the data on prevention.

In short: she ruled. And Kate was a huge inspiration to Gwenn when she competed in pageants from age 22 to 24.

So I’ve been watching the Miss America Reality Check show on TLC, and I’m shocked at how narrow-minded a lot of the girls are. I don’t see a Shindle being crowned this time around. As for my state’s contender, Hannah Kiefer, I had the privilege of meeting her two weekends ago. She’s a nice girl, but is also an advocate for abstinence-only education.

I emailed my hematologist about getting that ultrasound to see if there’s any residual weirdness going on with the bleeding. Overall, I’ve felt good, just very tired over the last week.

For instance, in Winchester after the pageant Gwenn and I were hanging out with friends at the hotel, and I just crashed out on one of the beds for over 3 hours while they gossiped.

Today I got lab results back from my appointment with Dr. Greg, and the results were somewhat of a mixed bag. The good news first: my t-cells were 674! That’s the highest they’ve ever been, at least since the early days of my diagnosis. At last check back in September they were in the low 500’s.

The sketchy news is that my viral load was 124. Which isn’t bad, but it shows that there is some viral activity going on with my pet virus. The labs were taken after I was on my HIV meds for two days (remember, I do a week on/week off treatment regimen). So next month I’m going in after 7 days on meds.

So we’ll see. In the meantime I’ll busy myself with pageants and the crowning of a new Miss America, as I sit back and dream of the day when another Kate Shindle graces us with her presence.