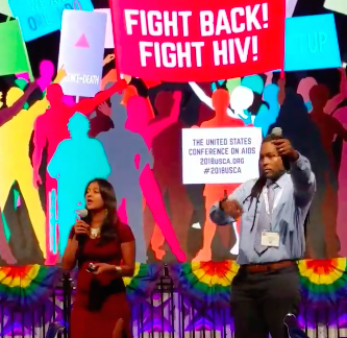 Controversy about the 2020 International AIDS Conference casts a shadow over 2018USCA.

At the 2018 United States Conference on AIDS, there has been much that could be considered familiar, yet inspiring. As has been the case in past years, 2018’s USCA in Orlando, Florida, has shone a spotlight on the work, advocacy and lived experience of more than 3,000 people living with HIV and HIV advocates. During the first 2 days of the conference, AIDS United and dozens of AIDS service organizations and activists have provided attendees with a host of workshops and presentations focusing on a wide array of issues ranging from harm reduction strategies and the need for increased cultural competency in HIV care to far-reaching plans to end the AIDS epidemic by enlisting the knowledge and support of all aspects of the diverse and powerful HIV policy, research and advocacy community.

However, if there is one thing about this year’s USCA that is tangibly different than conferences past, it is the looming specter of the 2020 International AIDS Conference (AIDS 2020) in San Francisco and Oakland, and the impact that the Trump administration’s policies may have on HIV advocates across the globe. At the opening plenary for USCA 2018, Naina Khanna of Positive Women’s Network-USA and Larry Walker of Thrive SS laid out their case for why the International AIDS Conference should not take place in the Bay Area in the summer of 2020, outlining myriad reasons why the political climate in America under the current administration is in hospitable.

During her speech, Khanna, who is based in Oakland along with the national hub of PWN-USA, stressed the many dangers and impediments that holding IAC 2020 in the Bay Area would present for some of the most vulnerable populations impacted by HIV both domestically and internationally. Citing the Trump administration’s draconian immigration policies, the continuing ban on sex workers and people who use drugs from entering the United States, Congress’s recent passage of the harmful anti-sex worker SESTA/FOSTA legislation, the financial burden inherent in asking attendees to find lodging in a city with the highest rental markets in the world, and The White House’s indifference emboldening white supremacist groups, Khanna and Walker told the assembled conferees that it would be reckless and irresponsible to hold the International AIDS Conference in the United States at this time.

As Larry Walker put it during his remarks, “When I think about the iconic words that came out of The Denver Principles, ‘nothing about us, without us is for us’, I don’t think about an International AIDS Conference that excludes sex workers, people who use drugs, people who are from what Trump likes to call ‘shithole countries.’”

The reaction from the crowd was at times muted, but largely positive. The group leading the charge to have the 2020 International AIDS Conference moved out of the United States, #AIDS2020ForAll, certainly realizes the personal and political complexities of asking HIV community leaders and advocates to call for the removal of the largest AIDS conference in the world from the United States where it could raise awareness for issues impacting people living with and affected by HIV in the United States but they say that any awareness that comes from such a conference would invariably be drowned out by the effects of the country’s toxic political climate and the negation of a platform for the most vulnerable populations living with HIV across the globe.